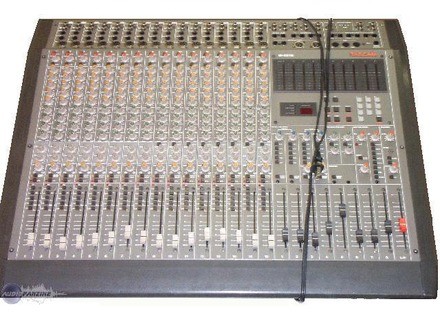 Tascam M-2516
4
This a 16 channel recording mixer with RCA inputs and outputs. It is a great mixer for pairing up with Tascam multitrack reel to reel machines, as most of them use RCA ins and outs.

It has 16 XLR inputs with a main phantom power switch for all 16 channels. Instruments can also be recorded through 1/4" line inputs on each channel. The board consists of 8 busses with 8 group outs, 16 direct outs, and returns for each channel. There is a built in talk-back microphone and separate control room/talent mixes and outputs that can be used.

The EQ is semi-parametic, and each fader provides a pretty wide area of control. There are also MIDI inputs and outputs for MIDI mute automation. The board can also access MIDI mute automation without the use of MIDI controllers by setting up MIDI scenes in the console memory. Basically, the board will take a snapshot of which channels are muted and which are not, and can recall these different scenes during the mixing process by hitting different numbers. This is extremely helpful for eliminating tape hiss while recording on analog decks.

The board is fairly easy to use, especially when following the manual. Each channel can be recorded or output to any other channel/track, which can be very helpful when doing multiple takes across multiple tracks, such as when recording vocals. Once the user has run through a few of the functions repeatedly, operating the board starts to become second-nature.

This is a relatively quiet console for a budget recording mixer. The EQ control is decent and it's quick and easy to punch up some great tones.

For the money, this is a great first "real" recording console. Before this console I owned a Mackie 32.8 mixer, but wasn't really a big fan of the sound quality on that board, and it had some problems with its circuits on some start ups. Used, the Mackie sells for much more than this Tascam mixer.

I wish it had 24 channels, as I was recording onto 16 tracks at the time and the additional channels would have given me greater flexibility on mixdown. However, 16 channels onto 16 tracks is workable. I never bothered to pick up the M2524 because I got a great deal on a Soundcraft Ghost 32.

smileypitt's review (This content has been automatically translated from French)

Tascam M-2516
5
Console 16 mono channels with mic XLR (phantom power supply switch common to 16 input) line input (jack) and an input "tape" for the return of Magneto (RCA) and yes it is a console "in-line! Live out CAR on each slice.

7 years of use in repeating and sound recording, just a few pots of frequency on the EQ a little creaky.

Most: its a console in-line
The least: some connectors in CAR

Tascam M-2516 manuals and other files