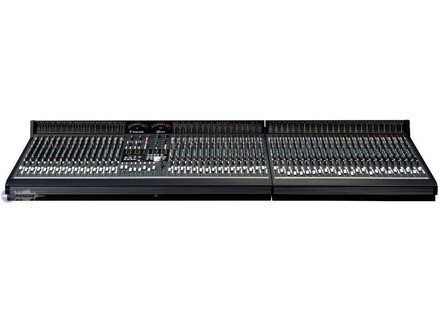 Soundcraft Ghost 32
5
The Soundcraft Ghost 32 has 32 A (main) channels with faders and 32 B (return) channels with knobs. The A channels have parametric EQ with a variable Q, whereas the B channels have high and low band EQ, which can instead be switched to the main channels upon mixdown. EQ can be disengaged on any channel (A or B) for recording or for comparison at any time. Channels A and B can be combined to mix up to 64 channels simultaneously. There are direct outs for each of the main channels which can also be switch to 8 group outs. There are 6 auxiliary channels.

The console mostly runs at +4 through 1/4” connections, but if the user opens the board and moves some jumpers it can be set to record at -10. Connections that can't be changed all have a trim to adapt to the level needs of your studio. All 32 microphone inputs are XLR and have individual phantom power on each channel. Nearly all of the connections are on top of the console towards the rear, rather than behind the mixer, making for easy access and patchwork.

The board has MIDI mute automation through stored scenes, can be synchronized through SMPTE time code, and also can control various multitrack recorders with the correct data cables.

There is an optional meterbridge and a connection for an additional 24 channels, but I never have had the need to purchase either of these pieces of gear.

It's very easy to get a great sound quickly out of this console. Although such a large desk can appear daunting at first, once the user learns how to operate one channel, he or she understands virtually the entire board. This is made even easier through the use of the well written operations manual.

This is a great console and I was ecstatic that I was able to pick it up for such a great price. The board has held up well; only recently have the little gremlins that do some strange things with the LED's and dirty up the pots have started showing up. However, as with any board, that's one aspect that the user has to come to expect.
Did you find this review helpful?yesno
»

AlexPalmito's review (This content has been automatically translated from French)

Soundcraft Ghost 32
3
Rather imposing studio table 32 channels 24 channels + extension
c is a combination of split and in-line (a switch on each slice to move from between the magneto returns) which allows two-way 56 times (!!)
quite full, with 8, mute automation, 4-band eq I believe, two parametric bands.

I currently recording a top album (on a tascman HD24 24 tracks on DD)
for features plenty to do, lots of tracks, lots of items ...

Okay so I am rather disappointed, after the test was decid preamps use only external preamps (LA Audio Nagra)
In terms of eq I'm Strongly believes either, fo that they grow to be truly effective and suddenly is twisted slightly the original signal.

I'm working on it for 3 months, and after having had the opportunity to work on REAL Studio consoles (Sony, Amek, Trident, Lafont) ben frankly I'm disappointed.

Okay so obviously the price has nothing to do but easy to see why.

I see NO, but then NO connection with SSL, so after c may be I am difficult (and I have never boss over SSL jespere but frankly it sounds better than that !!) but I'm not sure if wanted.

It was not me but frankly I 'not will buy, and I would advise not.

I had an old boss Soundcraft modular 32/8 (desolated I remember all of the model) ben frankly I had found the much better than ghost, the moral of this story, as would say our friend Cabrel " it was better before "!!
Did you find this review helpful?yesno
»

canonj's review (This content has been automatically translated from French)

Soundcraft Ghost 32
5
Very good mixer 32 the ghost is an analog reference in this range sound reproduction is very good quality even excelente because the manufacturer is soundcraft harman SSL manufacturer of world reference. copmposant some of the ghost comes from SSL (converters) if a person wants a Soundcraft Ghost 32 it should not even hesitate because no concurrency in this range

3 of 12 people found this review helpful