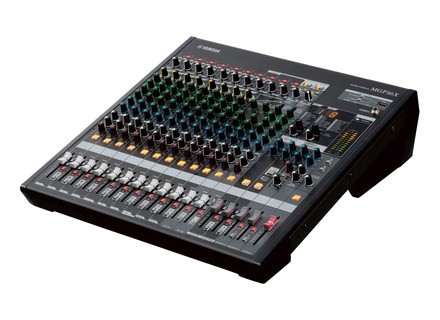 All user reviews for the Yamaha MGP16X

Yamaha MGP16X
5
Console to the analog face but with the digital board.

For the number of channels, not easy to give the traditional indications; ago 8 mono channels usual classical two stereo channels, but more importantly, highlight of the console, two pathways that can be either two mono channels, 2 stereo channels, I had never seen on analog consoles in this price range. Note also an input for iPod and with a company based leveler which prevents volume differences in a playlist.

On each channel, the conventional gain, phantom power, pan etc. ... 3-band EQ and classic, with a semi-parametric on mono channels.

Of the 8 mono channels, a compressor that can act as a limiter. A single setting, the compression ratio, but it helps out, it works on a voice, an acoustic-electric guitar or a perceived traditional (that's what I tried).

MGP16X in the Swiss army knife, there are also two effects processors, one with reverb, the other more complete with delay, echoes and other. It's clean and it avoids carrying basic rack effects.

For details, better go for a ride at Yamaha.
It should be noted that the console has 2 retractable brackets Rack mount (19 "standard).

Operation is extremely simple for a bit that has already touched a console her.
Unless you forget to press "on", it has no sound problem.

Function that can be useful, a ducker disengaged, some will call side chain, namely a compressor which reacts to the signal by the mono channel 8 but attenuates the signal from one or two stereo channels. For DJ, it acts as auto talkover.

Its side, with microphones and correct good facade, I easily found the timbre and dynamics of my instruments and my voice. It does not blow, it's balanced, it runs well.

I for 1 ½ months. It does the job, even though it does, this is a flexible, versatile, for a small group, a DJ, a theater ...
I like its good to do everything: the hybrid channels, effects, compressors base ... It's convenient, it saves space in transportation and in-house, besides it is lightweight and feels solid.

This console is closer to the big machines that entry level mixers (Behringer not to mention) by its overall quality and its sound, but its price is reasonable. I do not regret this purchase, on the contrary. Her older sister will now have time to observe the walls of the closet.

Only thing I regret is that two of the four are dedicated to internal effects and we can not use them in the traditional, but on closer look, most consoles of this type generally provides that of the few exits.

Other than that, throw yourself on it!