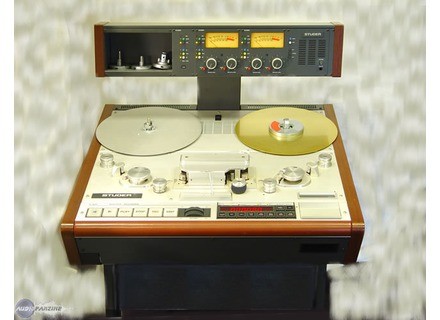 A820, Analog Multitrack from Studer.

Studer A820
5
The Studer A820 is an analog multi-track tape machine.  The A820 is a 24 track machine, consisting of both the tape section itself and a portable controller.  While I'm not an expert with tape as it was a bit before my time, I have used the A820 on a number of occasions simply to record with, after wards of which was dumped into Pro Tools.  As far as being user friendly, the A820 is pretty good.  Like I said, I don't have an incredible amount of experience with tape machines, but I do know the basics of how to operate a machine, and I found that this was enough to keep me a float with the A820.  Although I really only used it for its basic features, I found that everything was pretty easily located and that it was more or less what I had seen with other tape machines.  Having the extra controller is nice for when you are on the other end of the board and don't want to travel all that way back to the tape machine.  As far as sound quality goes, I was blown away by the A820.  I should say that I was also using it with a Neve 8048 console, which definitely had something to do with it as well!  However, recording in the tape medium with the A820 also had a great deal with the sounds that I got.  It captures the low end perfectly, and for recording drums it is ideal.  I don't think that I would be able to do a full session with an A820, but for just recording basic tracks the machine wasn't all that hard to use and I found that the sounds I got where pretty special.  The Studer A820 is generally seen as one of the best tape machines that Studer has to offer, although if you have one of these there are literally no support left for them, so you're pretty much on your own with that.  Having said that, if you're in the market for a top notch 24 track tape machine, definitely check this one out.