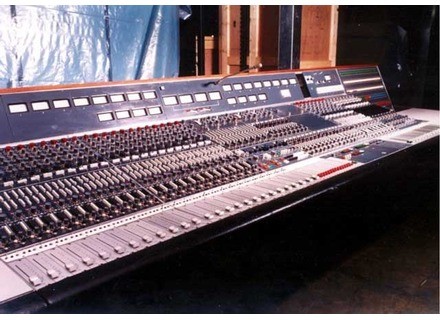 Neve 8048
5
The Neve 8048 was the first analog console that I ever had the pleasure of using, and to this day remains one of, if not the best that I have ever used.  The board is broken up into a few sections for both recording and monitoring.  It has 24 channels in the main section and then has eight more on the right side.  Each channel has a mic pre, an EQ section, a sends section and a fader.  There are also two compressors built into the console.  While the board also has a variety of other features, it would be overkill to mention everything going on here, but suffice it to say that you will have enough to work with...

While I can't say the using the Neve 8048 is easy, I will say that if you are familiar with any Neve console and consoles in general, that everything should make sense to you.  There are certainly a lot things to learn about this console and all consoles, but I wouldn't say that the 8048 is anymore complicated than any other analog board out there.  I've never seen a manual for the 8048, but would imagine that it would be huge!

The overall sound of the Neve 8048 is outstanding.  Everything about it is perfect in my opinion as the mic pres and the EQs sound incredible.  The modules in this console have been copied over and over again and are some of the most sought after pieces of gear in the recording industry.  I've used this console to record all sorts of instruments including a full drum set, vocals, guitars, piano, and organ and have found that no matter what I record with this console that it sounds great.  The compressors also are top notch and I find myself using them as much as I can as they too have an incredible tone.  In terms of pure analog tone, it doesn't get better than the 8048.

The Neve 8048 is my favorite of the Neve consoles and is in general the best console that I have used.  It has everything that I would look for in a console as it has enough channels to do just about anything with it.  You will find these in large studios, but I would think that you would have a hard time finding one to buy and it would definitely cost you a ton of cash.  If you ever get the chance to use an 8048 console, I highly recommend taking advantage as this is truly one of the best consoles ever made.