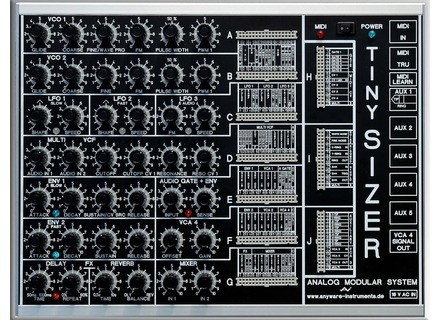 The configuration is not simple at all. The manual did not exist at the time of my purchase and only came out after a few PDF, and I admit that it has helped to discourage me.
Screen printing is all pokey and cables as thick as a toothpick in bulk for imaging because it is not easy to imagine the Tiny.
It was my second after a modular jomox Sunsyn.
It is not easy to patch, better to be strongly initiated and it is mandatory to know what you do and where you go.
The knobs with its oily light resistance and breathe quality and that was perfect.

Question's was superb. I sold my sunsyn which served me in unison on the 8 voice polyphony, and I took the cheaper Tiny.
Question her on one or the other there is the same size, same power, or just the sound that is sufficient for himself and eats whole spectrum. However, the Sunsyn was more musical to my taste and able to scream like to be very soft. The screams and Tiny is brutal, point! So it's good but not perfect.
It's very powerful and it's a good synth. Especially for that price is unexpected. If you have time to patch it is better than ca MS20 for the same price. A word ...

I kept it three months. I never realized how lucky I was to have the Sunsyn: no loose cables, 8 voice polyphony, memory etc etc.. I just had to sell it to change my set up and AC broke my heart to sell it anyway. The Tiny came home as an alternative at lower cost.
For his top is nothing to say but I sold it because I did not like the patch, the screen minus the time lost to just one sound, the inability to record and then move to another patch, and the Tiny monopolizing the time I save.
The top of the sampler would have had to build and then another patch etc etc
In short I moved to Jupiter 6, and I am very satisfied. AC module unless it is a little less wild but more direct and easier to use and re-usable in the crowd creating a sound.
Ideally I think to stay and hang on the modular (as is the case, outside the sunsyn I have not hung on the philosophy that matter) I should have taken a semi modular type of Red Square and see Telemark a Telemetry and I exclude no one take.
Noted that the manufacturer itself is very available, very friendly, speaks English, is passionate, cool, keeps his word following the exchange of mails but against the Tiny package is really dingy. Tiny for it will cost you € 1300 including shipping with LED lamp and support of computer Tilt + a bunch of patch cables in bonuses.
It's still very good but not for everyone, not really.