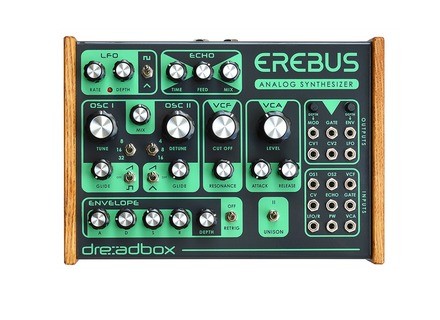 Dreadbox Erebus
4
The Dreadbox Erebus is a very interesting synth hailing from… Greece! It’s a monophonic/paraphonic, 2-voice and semi modular model.
Granted, its look is quite peculiar but I really like it, plus it seems sturdy.

It’s a rather basic memoryless synth, but the modulation matrix, although limited in features, adds many a possibility (including some which almost can’t be dispensed with, such as LFO control using the thumb wheel).

Envelopes are somehow weak: stinging basses aren’t its playground.
You’ll have to complete it with a more aggressive sounding – more “moog-esque” – synth.

BUT, unlike the huge majority of new analog synths, its sound is very organic and drifts as you could wish (it really sounds vintagy), a bit like the great MFB-Dominion 1 but still with less punch and capacities – but the Erebus also only costs one third of a Dominion.

The sound is fat, thick, warm, mellow and creamy !

You’ll have to leave the oscillators enough time to warm up (10 minutes at least) so as to really stabilise them, but this is also part of the general vintage ambiance.
I consider that it excels in lead, brass et fx sounds.

However, it’s also very usable for bass sounds as it goes low in terms of frequencies, but you’ll only get mellow bass sounds hence not adapted to all kinds of music.

Actually, the sound irresistibly evokes tracks from the 70s or even late 60s.

Just to get an idea of what I mean :

This synth has some rare features for an analog machine :

- An excellent delay which can be controlled in realtime, adding an even more 70s-ish character to the sound.
- Each of the 2 oscillators has its own glide setting.
- It’s a 2-voice paraphonic model (like the Korg Odyssey). You actually get to choose from two modes:
1/ “Unison” mode, which makes the synth behave like a monophonic synth with the 2 oscillators playing along.
2/ mode “II”: when two notes are being played, each oscillator plays one of the two notes.

Another noteworthy feature is that the synth has an audio in which allows to process an external signal with (for instance) the internal filter or delay.

As for its cons :

- the external power supply is rather big (for the early models at least).
- no on/off switch.
- MIDI channel selection is difficult : you’ll have to take 4 screws off from the bottom of the device, open it then choose the setting you want by moving the jumpers so as to choose a specific channel, as the default mode is omni.

In a nutshell, the Dreadbox Erebus is an excellent secondary synth for a very interesting price. Its sound is rather soft and mellow while delivering a very organic, thick and grainy sound: yes, it really IS vintage-sounding!


NB : just after posting this original review I learnt about the future release of Dreadbox’s "Hades", a bass synth in a similar format. It should be very complementary to the Erebus and provide punchier sounds. And since the price is expected to be rather soft on the wallet (at about 290€), it might be interesting…


EDIT: I foolishly sold my Erebus after buying the Dominion 1, as I thought it would provide the same sounds. It can indeed sound quite close, but the two machines’ oscillators are still very different and in spite of its great sounds, the dominion can’t sound as mellow.
I certainly sold it too fast and quickly regretted doing so, so I bought a new one and remarked a few differences from my original model, so I’ll mention them here:

- the power supply is much smaller and doesn’t prevent using the neighboring sockets on a multisocket.

- The oscillators seem to stabilise quicker.

Published on 10/27/14
Erebus, Dreadbox’ new analog paraphonic synthesizer module, will be available for purchase in December.

See all 278 photos of Dreadbox Erebus »

View all 18 videos of Dreadbox Erebus »