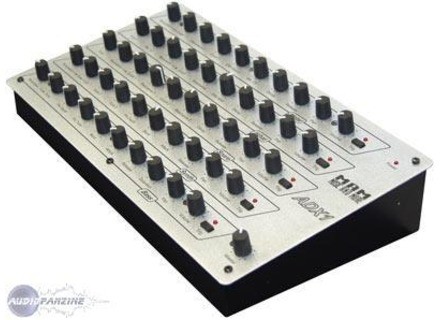 Spinny's review (This content has been automatically translated from French)

Music And More ADX 1
4
This is an expander with 5 baterie analog instruments with 10 instruments rglages by Pan and Volume for each. There is also a master volume knob making 51 pots.
The machine reoit notes by midi in, out and sounds .. that's all! Nothing midi out except the incoming signal (Through).

The intruders:
- Bass for the kick with, among others Tune, Attack, Release and Distortion.
- Synth used to make sounds bizare (Piioouu, Brrrr, SWWWEEEPPP, etc ...) There's three SETTING THE Tune, then three oscillation? I doubt it ...
- Tune Snare with, among others, two bandpass filters with Cut and Res and release. Note that CASC has an open-and closed-snare snare according to the note played, the same is true for Hihat and Metal.
- Hihat two oscillator, filter, and especially a Release (TSSSS! !!!).
- Metal used to make Crash normally but I paid to clap and killing (see FAQ). There are two oscillator, filter, and especially a Release which is a reverb effect on claps (gnial!).

It has five sounds the base, but with open and closed was 8.
No effects, no memory ... What's not much, if not an analog sound EMDU.

The machine has a mono output for instrument and a master output STREO. There is an ON / OFF button, a hole for the external power supply provided, a MIDI In, one MIDI Through (the knobs do not return anything) and four small switches to select the MIDI channel.

The machine comes with a 4-page facicule whose only interest is the preset printed the end ..
no memory presets so printed as before!

The machine is very small but rather c practice, and is provided with plates for the rack.

Solid level is good but not great, but everything is light enough mtal (medium finish).

The manual does not help so you have to create its patches or even (and note ..), which is a bit tedious to beginners but cratif trs. Ultimately we know what parameters to move for a particular sound.

It's a real musical instrument, it cre instruments, they played and modified live.

The use is very simple if we understand What does the parameters.

The sound ... is an analog machine then YES! BOOOMMM! TTTSSSSS!
The machine spits out sounds awful, dirty. There are no samples, so that analog synths sound is fabulous, but it will appeal that those who love dirty. The snare and Hihat are MODELS of CARC. I have a weakness for the Open Hat trs rising high into the treble.

The kick, the kick we need to talk. The kick is dangerous, because if you push the release and the distortion it is possible to get some kind of huge hole BOOOMMM informs fit the most robust of the speakers, but also able to dance a foulle juqu of clubbers' thirst (or more speakers ...).

Note that the machine the unfortunate tendency to pick up the TV (!!), because I thought she was blowing a lot so I amplified my breath and Discoveries that I captured on TV. It is not at all because Gnant normal or even high volume is a breath n'entent low.

We love or hate. I love it. This machine is not prcis, it's never the same, it has no place in the studio, it blows, it is not super sexy, but ... mchament he spits.
The machine is a cratif That a 808 or 909 in terms of Fast Fashion sound, but lacks a good squenceur and memory.

(Note to homeowners: write down your presets in the FAQ on the same MODEL that I post to get a clap, as we will be able to have a bank of presets).

Music And More ADX 1 manuals and other files