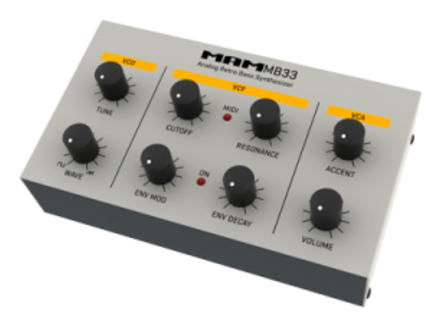 Music And More MB33 RETRO
3
I’ll try to make it as short and straight-to-the-goal as possible.

I play analog acid and work live with MIDI-driven synth using Ableton. This machine is ideal for my setup as it’s light and easy to carry.

100% analog (without being an extremist of analog sounds, it provides a very fat signal – and it sounds good!)

Allows to mix waveshapes, as opposed to the TB which only features a square/saw switch

The square on this machine doesn’t sound at all like a TB’s (nothing in common when you compare it with Cyclone’s Bassbot), but according to me that’s a real asset. It’s close enough, yet more versatile than a TB. I really like this little box. the signal is full of harmonics and the square et sound is "woody" , that’s what comes up to mind every time I play it, the saw is a little more brutal and mixing both provides an additional upper octave , which is very useful for dropping sounds.

The controls are well-conceived and easy to use and to change in a live setting (turning these knobs is a real pleasure! :p ), plus you can calibrate the machine and change the filter’s behaviour dramatically. Very easy to sequence.

The Volume knob slightly distorts the sound after 50% of its course, which is a nice thing as it allows the signal to be more dense!

And precisely, using a good distortion stompbox allows it to really rock, but I also like it a lot for its non-overdriven highs

It features a VCF IN which allows to mix its own signal with another one of your choice ; yet, the MB33 has to play notes for the external signal to go through it, otherwise no signal at all. Hence, you can’s process drums with it.
However, you can make great sounds using it, ala additive synthesis, making it a very creative and experimental feature.

The VCO is very stable and instantly gets in tune when you set it on, almost no tuning problem at all even in a wet environment or with extreme temperatures. By the way, it’s technically not a VCO but a DCO as an electronic chip manages the VCO tuning: no problem, it has no influence on the signal (except for the fact it doesn’t drift, which is a good thing in that case). Plus, it sounds great!

First be aware that this is not a TB!! You’ll soon realize that the machine features has own personality which greatly differ from a TB303’s. I ended up accepting that as a fact and creating 303-like leads. It also works for non-acid basslines and even to create analog toms. In the end, it’s much more versatile than you’d expect and will still do the job (and do it well!) for analog acid beginners.

Unfortunately, it doesn't feature MIDI CCs, and hence entirely rests on the manual use of its knobs which are the cheapest on the market (not even made in China…), which is a major flaw in its design as they’re much used and very fragile! This is THE ONE flaw in this device, and it’s a real pity.

:
I have two friends who also own MB33Retros, and both of them had problems with the cutoff which fails and cuts the sound at unexpected moments along the course of the knob;
It’s all the more of a shame that the brand takes pride in its German-made quality. Compared with it, Korg’s Chinese-made Volcas are more sturdy and reliable.

The knobs have sunk inside in some units, making them hard to turn ;

The knob buttons are made in a bizarre plastic and are very badly balanced, which adds even more pressure and weight on the – already fragile – knobs. I’ve changed them, and no problem so far, no cutoff problem either but it’s only a question of time…

Finally, the sweet spots for some parameters such as the envelope filter are very precise and request to be set very precisely (this also makes analog’s charm, but a beginner may feel surprised)

So, if you’re handy and know how to change a knob, it’s a good synth, very well though and nicely designed. As to changing the knobs, the PCB is big (edit: it’s CMS, so beware though) and the welds inside are big and clearly done (edit: the knobs themselves don’t fail, the welds do: a friend of mine has repaired his very easily while keeping the original knob and everything works fine :D )

In a nutshell, I love its sound with all my heart(!), it can both sound hard and sweet, sometimes liquid, sometimes mate and biting, but it can also be warm and full of wood… lol, I swear I’m serious! ^^
It’s more versatile to me than a TB, you can make it do percussive basses or square leads easily, or push the resonance and play acid: it’s very expressive in spite of the small number of parameters available. I’ve used it several times live and we even used two at once (bass and lead) on a good sound system: people were very surprised by its sound

Though, if you were to buy it used, beware and test and try all knobs before buying! Though the synth is very good, the way the knobs behave is a real issue especially as you’re supposed to be tweaking them all the time … I’m sure some units are more reliable than others, but since it comes from a design fault many are bound to fail, for sure… My friends and I resent MAM a bit.
One of us is currently discussing the matter with their customer service, I’ll update this review if we get any news in that regard

(UP: since it would have taken over a month for it to ship back from the customer service in Germany, we opted for repairing it ourselves).
Did you find this review helpful?yesno
»

View all 8 videos of Music And More MB33 RETRO »

Music And More MB33 RETRO manuals and other files