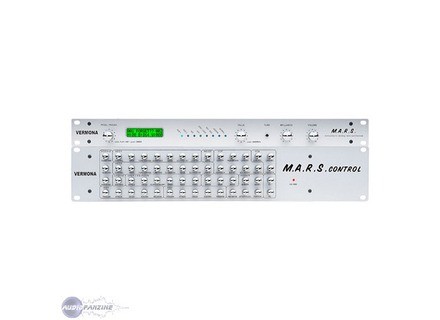 The MARS is 100% analog, but features a digital interface (MIDI, patch saves, display), like the pulse for instance.

VCO’s
-2 identical main oscillators, each offering 3 waveshapes (saw, square and pulse, the latter being a square with a 12.5% fixed PWM). Each oscillator has 2 sub-oscillators with squares, for a total 6 possible simultaneous oscillators (sic !)
-Noise generator (white noise)
-Separate glide for each VCO + glissando
-Ringmodulator (using both oscillator’s saw waveshape)
-Synchro (osc1 is slave to osc 2)

VCF
-24db low-pass filter with resonance. There’s an auto-oscillation but it’s quite strange. It doesn’t follow the pitch (!!), plus it only starts at very high resonance settings (almost maxed). So practically I’ll almost say there is no filter auto-oscillation at all, in spite of the fact it is indeed able to create an audible frequency by itself.

Modulations
-2 LFOs. The first one is dedicated to the pitch of oscillators 1&2, while the second can be assigned to cutoff, resonance or amp (the three can be accessed simultaneously). The LFOs feature variable symmetry, and can get into the audio range (until around 200Hz). Each LFO has 5 possible waveshape: triangle, square, sine1, sine2 and S&H.
-LFO 1 features a reversible AD envelope which always triggers before the LFO. It can be bypassed by setting attack and decay to 0 , or used as a delay for LFO1.
-2 ADSR envelopes. Envelope 1 is affected to the cutoff but it can also be to the amp or resonance. Envelope 2 is affected to the amp (100% intensity), or resonance. Both envelopes can be triggered by LFO2. They have quick settings (1ms to 20 seconds/10 seconds for attack).

All in all, the M.A.R.S. has all the basic features of an analog synth, with no excess. Just what it takes to create versatile sounds, with a special mention to some small proper features (e.g. separate glides).

With the M.A.R.S. Control, no problem! All 54 settings are at your fingertip, a real pleasure...

Without the M.A.R.S. Control, well, it remains quite usable, but each sound takes longer to set up. Playable, but not much fun.

The user’s manual doesn ‘t matter much when you see how simple it is to use. I still had a look at it to check how to save sounds but I think this is it…

-Each VCO has a saparate Glide, which is nive. It allows smooth transitions between each note, and depending on the setting can produce interesting detune effects. With sync mode on, the result can sometimes be surprising.
-The variable symmetry LFOs : they’re very efficient. The sine1 and sine2 waveshapes (the most peculiar) allow very original modulations.
-The ringmodulator is a bit special: its outcoming signal can be reinjected inside - or not. So you can use the ringmodulatorwithout losing the big sound, a nice move!
-The envelopes’ speed (1ms!). It’s fast (among the fastest I’ve ever tried), so bring the 180BPM pizzicatos! The Waldorf Pulse (my other analog synth) is trailing far behind (its quickest is 2ms).
-LFOs speed (get into the audible range – approx. 200Hz)
-Amp modulation by LFO2: as the LFO gets to the audio range, the VCA modulation by the LFO at high speed (value between 120 and 127) produced an AM effect which sounds in the same time nice, dirty and noisy, a bit like a dilterbank but in a lower range. This is not mentioned anywhere, but this adds an appreciable function that I really like…
-The 4 sub-oscillators that allow to make the sound bigger and dirtier.
-Resonance apparently features gain compensation, inducing that even at extreme resonance settings the patch’s volume almost doesn’t get lower and keeps its punch! Great – and the same as for the AM, it’s not even mentioned anywhere.
-Extended cutoff range and LFO speed (255 values instead of 127). The cutoff has a “brightness” setting, which allows a more accurate setting of it. It seems stupid at first, but actually it brings an incredible precision.
-AD envelope before LFO1 (can also work as a delay for the LFO). Using it sparingly on a single oscillo, you can get temporary detuning effects, which is great. It also allows several extreme settings when combined with LFO1.
-Envelopes can be triggered by LFO2. Just plain HUGE! But an audio sample will sound louder than words…
-Brand new combinations (e.g. separate glides+sync).
-Entirely MIDI-controllable with the possibility to save patches.
-That sound, my friends, THAT SOUND !!! It has something of a Northern sound so you can gat all sorts of rather soft sounds, as the filter can be quite well-behaved, but not only… Different settings allow to get a much more aggressive sound. I especially think of the sync, ringmod, and AM mode (through VCA modulation). With the resonance being compensated, it’s also easy to “acidify” a bass line. In general, the filter reminds me that of the Waldorf (Pulse), but in a more punchy way. Also, the sound is less subtle than the Pulse’s, it’s wilder and rougher.

-LFO1 is only useful for the oscillators’ pitch. Too bad they didn’t include at least the cutoff or resonance, which thus can only me modified by a single LFO.
-Noise can be set only at 4 volume levels (0%/20%/60%/100%). It probably wouldn’t have been more difficult to assign it 127 values, especially as a knob controls the colume on the controller.
-The waveshape’s PWM can’t be controlles (too bad, but surprisingly it took me a while to remark it as it finally really can be used without it – too bad, still).
-Ringmodulator’s frequency can’t be controlled either (I personally don’t care at all)
-Neither the ringmodulator or sync takes the sub-oscillators into account, only the 2 VCOs’ main waveshapes (a missed opportunity to make the sound even bigger…).
-Resonance’s modulation amplitude is set to 100% (LFO & envelope).
-Only 8 possible velocity settings (instead of 127) for the VCA and filter cutoff responses.
-Average quality controller compares with the synth itself (which is well-built).
-It takes two hands (or extensible hands) to save ! I can’t believe they made such a mistake, while editing is so quick with the controller!!

The MARS is an excellent small analog synth, which doesn’t disappoint a bit in spite of what might first appear as a minimalist set of functions. A lot of things can be done with it as each feature has been well-thought, so I’d put rate it as comparable to the Pulse. Fat bass, sub, sweet to aggressive leads, old-school pads, and all sorts of twisted FX sounds provide a very extended range. It has its own sound color, but I don’t think it’s that easy to identify for sure in a mix.

To stop old debates, even if this synth is German it doesn’t sound cold – provided you know how to use it! The 6 oscillators provide for a sound that’s well enough powerful and warm!! Still, the cutting filter allows to get a cold sound if need be thanks to a pronounced resonance (especially when pushed), and to me this is what makes these lovely Northern synths so good! When you close it enough with more than one oscillator (two is already great

), you get a good ol’bass sound ! :D
You won’t get orchestral sounds from it (for newcomers who’d wonder), it’s 100% electronic sounds – but with quality!
Almost all settings can be MIDI-controlled (almost anything can also be assigned to the pitch wheel, footswitch, aftertouch and so on). Plus it looks good – what more could you expect?

Please note before you buy it : while the synth itself is sturdily built and reliable (really sturdy), the MARS controller is rather cheapish: from the lower quality knobs to the PCB card which is not screwed to the rack, all hints at fragility… Yet, it’s not expensive and is very useful (makes sound programming very natural and easy), so I’ll still recommend it in spite of its flaws.

I’ll add audio demos here soon if I find the time to do so.

EDIT
Nothing has changed from my previous review, except for two things :
-it can produce bass sounds, no contest, but it’s not its strongest point as for that purpose it’s not as powerful as a Pulse or Moog. Yet, it will satisfy those craving for deep bass sounds that don’t get over everything else in the mix, or for more industrial sounds – actually it can suit many needs.
-its sound is definitely grainy, rather dirty especially with the pulse or square waveshapes, it really contributes to its proper sound.

Here are 3 short videos (in French) I put on Youtube. I sort of cheated on the last two as effects are included (but hey, that’s what these videos are about), while the first one is a “real” sound demo:

And here’s an extra 23 audio demos, rather technical and dedicated to some specific features of the synth. Here’s the link to go and download them:
http://electropics.free.fr/vermonamars.html
Did you find this review helpful?yesno
»