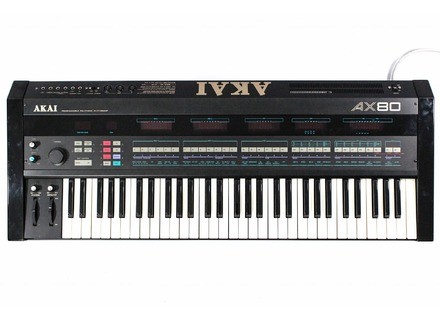 Akai Professional AX80
5
For specifications, see the info tab, it fits perfectly with the technical specifications of the machine.

Very easy access, a key 'Edit', you press the keys with the name of the parameters and turn the knob to increase / decrease the values, it could not be simpler. Undoubtedly a synthesizers numerical control the fastest access. Additionally you can see a little of its architecture through the meters that are in front (it makes me think the DX-1). was 32 factory presets (permanent data ) and 64 user locations (32 in bank A and bank B in both.) The cool thing is that it is not Omni Midi, you can select the transmit / receive MIDI channel.

Side sounds, I agree with the opinion of some Backdraft, the sound is excellent. I would say the sound is pretty crystal with fully open filter, the filter sweep is pretty sweet, grain more filtered sound is really nice, more round and warm. Nothing to do with what can be done with the series of Juno for example, and, not least by the presence of two DCO's (as well as the large difference in components). Regarding the grain, I would also say it would be closer to a Prophet 600. The sound has a good dynamic, great for sequences or the low brass sounds. This is obviously not a search engine, but this synth is doing pretty well in a lot of types of sounds, if we want to go further you must add an advanced filter (with Midi Sync) and the result can be really nice (but it changes a little texture of sound) or an effects module. To control parameters with control-change would have been great but the implementation Midi is really basic (very basic). The velocity response really makes the most expressive synthesizer.

It is a solid machine construction, the line is simple and neat (we like it or not ...). Its architecture is very well thought out, it feels its ergonomics. For cons, I do not understand exactly why this synth is so widespread and undervalued. I would do this choice without hesitation.

here we have the paradox of vintage synths like this one is less known and has an architecture program with a visualization of the parameters thanks to 5 screens but all modular with large single button changes the value of some sulking. ... it is none the less very easy to program real-time unlike others of this generation ....

The sound is simply excellent as almost all good analog, often compared to Juno I've never understood elsewhere since 3372 chipset curtis therefore same as Prophet 600, oberheim Xpander, chroma etc ...
So the sound more granular characteristics of Sequential and Oberheim was the opposite of Juno that are good (especially the 60) but in a clearer sense finest ..

The same people who will 1000 euros for a Juno 60 deem indecent to more than 300 euros in a much rarer AX80 and some character especially since he has two tilt + sub 3 LFO and therefore reinforced that by juno ex
in my opinion if it was strewn with monitors its coast is more than 700 for the 8 analog voice are few out of JP8, OB8 etc. ....

how to say .... 5000 euros in JP8 and not want to put more than 300 euros a AX80 is incomprehensible to me, I sold my JP8 last year so this is a great machine but its majestic j 'I have preferred the 5000 euros in my account and I separated after 15 years of good and loyal services ... do not miss it

obviously you are so wealthy collector can assume very expensive maintenance of these beautiful toy (I kept all bills excellent JL Dierstein scary!!)

against euro by 4000 in a memory moog in super condition I can understand because unmatched in terms of polyphonic analog and what a sound!!

the resonant filter all its beauties is grainy and organic, lacks a bit of potato on the bottom despite SUBosc but that's quibbling
it is regrettable that the staircase effect on values ​​related to the digital encoding but hey!
cross mod is very éfficace it bubbling in the cauldron

if you found a great state and for me 700/800 euros is justified in 2013
because the coast is suitable compared to other analog go for it after having tried
as I do not think his side climb the more I do not sell it any time soon
unless a day artists such as Daft Punk announced that all done with a AX80 and leave his side was speculation because it is unfortunately often the case ....

10 of 18 people found this review helpful