Agrandir
Add this product to
Baloran The River
1/ 103 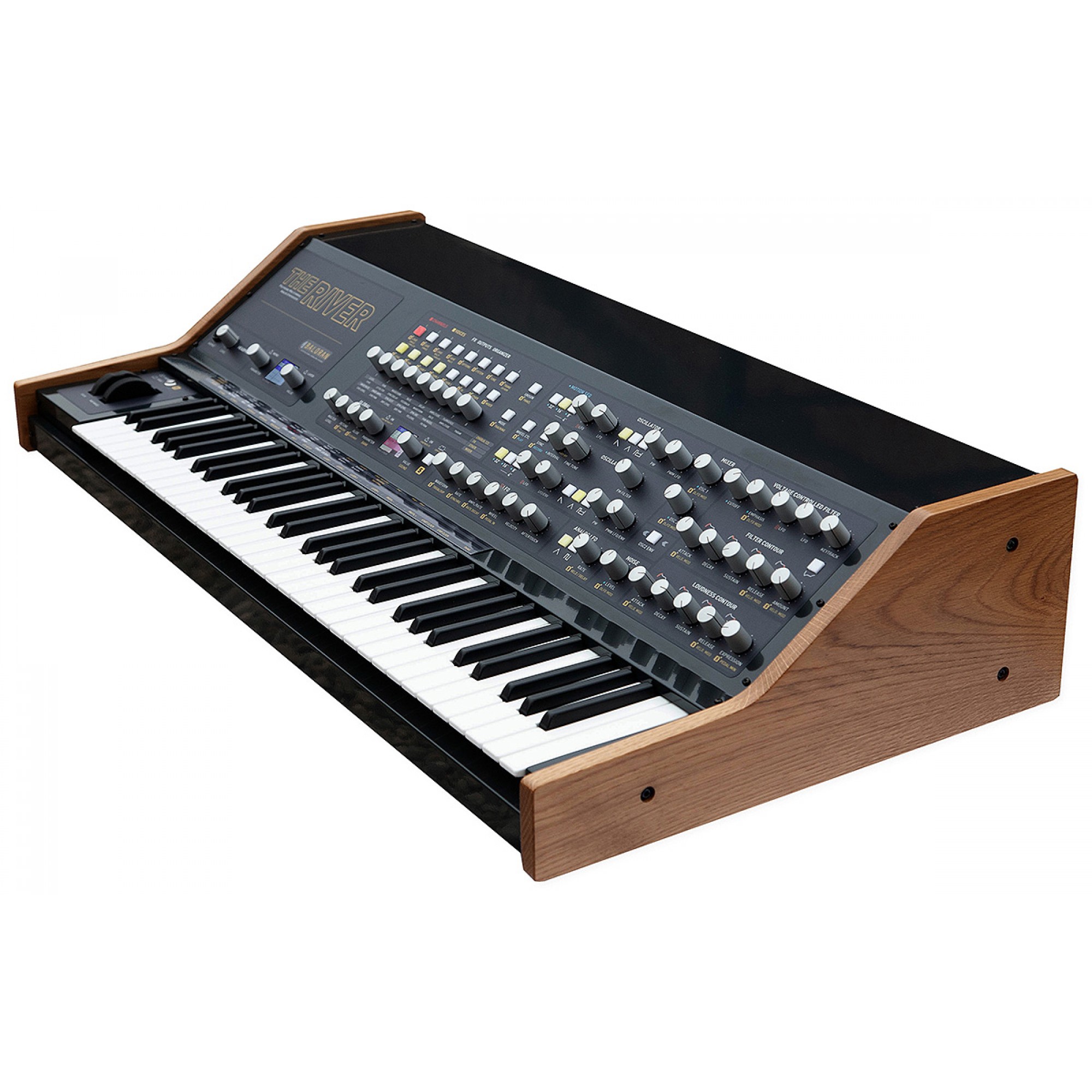 When the analog flows in the stream!

Review of the Baloran The River analog synthesizer

9/10
35 years after the release of The Moog Source, the young French company Baloran pushes the concept to the next level. The River, much more than a polyphonic multitimbral analog synth, is made with pragmatism, modesty, talent and innovation. An outstanding musical instrument! Read more…

See all 103 photos of Baloran The River

View all 50 videos of Baloran The River

"Rediscovering the pleasure to discover a machine"

On your left, The River Key, the management device for the keyboard, layers, arpeggiators… With a system you could describe as “click and push”, as it has a single button which is to be activated before pressing a key to call a given functionality. A very quick system.

But how to memorize all the keyboard shortcuts? No problem, they thought of it with a magnetic band that can be put over the keyboard as a checklist (and resembles a ribbon controller, by the way). And in case you’d prefer a screen-based navigation, the tiny left screen allows to manage the whole and display the setting values (such as arpeggiator, layers and so on). The screen is small, but features a very good resolution and high contrast. Everything is clearly readable on it - nothing in common with an Elektron and its eye-damaging screen…
On the center is the parts and Triko management system. The lower screen also allows seeing the modified values, preset names and many other elements.
On the right are the knobs and selectors for modulation and so on.

While we’re at it, the selectors perfectly react to pressure and the knobs are clear and precise. The precision scale is high, e.g. filter opening ranges from 0 to 400!!! All knobs don’t have such an amplitude, but they do when the musical aspect requires it (this is for a change compared with the usual 128 steps of Dave Smith Instruments).
The aluminium selectors are very pleasant to touch.

The keyboard is pleasant too – a really awesome high-end Fatar. The aftertouch and velocity respond perfectly, as they are perfectly calibrated for the audio engine.

Now, let’s get to the sound. Where to start?


Actually, it had been a long time since a synth last made me so enthusiastic. I’ve found a machine with a powerful sound, an incredible presence and a musicality close to that of an acoustic instrument (and I know what I’m talking about).
I’d say what we have here is a well-dosed mix between the powerful sound of a MemoryMoog, the presence of a 4-voice Oberheim and the expressiveness of a CS80. The last time my ears had been so pleased was when I tried a Polykobol RSF, but I hadn’t dared to tweak it too much lest it should break – I know how fragile and moody these can be.
Another rare and mentionable thing is that while reviewing the presets, I spent time on almost each and every of them. Each preset has its own musical value, you feel like you could make an entire song out of each of them.
Even if it takes from its distant ancestor the Moog Source, The River is much more versatile and allows producing sounds that would be impossible to get out of a “polyphonic” Moog Source. I’ve particularly loved some really beautiful synth piano sounds, was surprised by the power of some bass sounds and got stunned by the powerful – yet not aggressive-sounding – bells.
I was surprised to see that some pad sounds were composed of a sync between oscillators which generally provide with more aggressive sounds.
There are also some church organ sounds which are very convincing and powerful, as well as very inspiring theatre organs.
The pad or string sounds that include a luxury triple chorus are also awesome.
What struck me even more was how each sound manages to sound good, from the extreme low end to the extreme high end. I believe it’s a feeling that I had never had so much as with this one synth.

I’ve also tweaked the knobs, and you can easily get whatever sound you’re after even if the landlord sometimes advised me as to the ergonomics to help me in my quest. Of course, it’s worth mentioning that it’s a synth with a learning curve but in that regard it’s nowhere close to an Andromeda (which I also appreciate). Anyway, learning to use this synth remains a sheer pleasure.

Finally, beyond its extraordinary sound, this sound also seduced me with its musicality. As a classical musician, I love an instrument that responds nicely to my playing and this one does brilliantly. The keyboard’s response is nice, the dynamics is large and there is no latency when playing (which is not always the case, even with recent devices).
The expression knob is very well-thought and allows accentuating the whole.
The release speed is also a most important factor for expressivity, with pads for instance. If you release the keys quickly, the release is low, while if you release them slowly it gets bigger: well done!

The filter is astoundingly musical, when pushed its resonance can distort the sound spectrum but as punchy as it gets it never sounds aggressive.

Finally, I found the aesthetical choices to be fascinating – as I was lucky enough to get explanations from its very own designer.

For instance, the synth features 2 LFOs – Digital LFO and Analog LFO. Well, the analog LFO can’t be synchronised from one voice to another. This aims at increasing the randomness of the outcoming sound – something that I’d call more “acoustical”.
In the end, this provides the synth with an organic aspect, almost living and I’d even say a vintage thing that “new analog” synth most often lack.
Well, that’s not the case with this River, and if you close your eyes you’d sometimes almost feel like playing a genuine 70s synth. Astounding!

Oh, of course, you guessed it: I’ve ordered one…

I may edit this review when I’ve got hold of it, which may not be before several months which will allow me to save money, as, as you know, it costs in the $5k range. However, the price seems to me more than correct when you take into account:

- its sound
- its musicality
- the well-manages polyphony (and multitimbrality)
- the great keyboard
- the fact that the machine itself is made of iron with wooden edges and no fan (which is important to mention).
Also, on a more subjective approach, you can consider the personal investment of the mad scientist who designed it and builds it with his own hands.

Listen to the 75 audio files about Baloran The River »