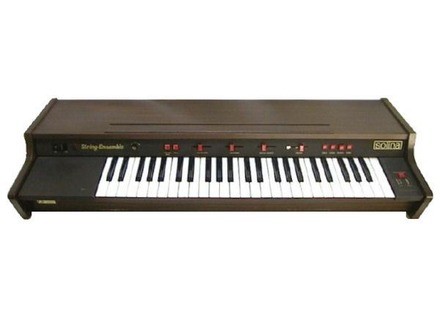 Eminent Solina String Ensemble
4
Keyboard 4 octaves, of Pratt-Read, super fun to play. There is the possibility to choose between four color tones for paraphonic part of the beast: Viola, Violin, Horn and Trumpet. For monophonic section, playable only on the first 20 notes of the keyboard, it is the Cello Contrabass and colors that are available.

Two mono output (String Sets MK1 and MK2 had no stereo), high and low impedance, an input for an expression and both Trig and Gate outputs pedal.

It is minimal, but there is no need for more. The instrument is very much in the logic of "Less Is More". I have the mk2 version is the one that already has the small button "Modulation", while on the MK1 version, there is no opportunity to disengage the effect.

The first Solina (MK1 and MK2) are solid instruments, solid, with a wooden box and inner steel. It's not for nothing they accuse more than 25 kg on the scale. So I try not to move it to the live, so it remains quietly in the studio and is played regularly.

It is with my Fender Rhodes and my acoustic piano, one of the most easy to use instruments. No need for manual use, no new sounds to upload via USB, no touch screen to calibrate.

This is also the weakness of the instrument: it is a true "One Trick Pony", in the sense that it sounds like a book thongs. It is certainly a little bit varied by mixing the viola with the horn, or playing once the sound without the modulation effect, but immediately recognized the sound of Solina String Ensemble color.

The Solina, or you love it, or hate it. He who has a weakness for soul music, disco, funk, but Krautrock, or other appliances styles of the 70s will be served. Because it was one of the most widely used instruments to sweeten the song with layers of "string ensemble" that were not so realistic that kind. Note that there is still a lot of other competing products that do not sound all exactly the same, but perform the same function. But we must recognize that the Solina String Ensemble is recognized relatively quickly, thanks to its effect "Chorus / Ensemble" relatively pronounced that immediately gives an airy, very light dimension to his base very close to the sound of some electronic organs based on an octave divider.

I love playing monophonic notes (violin only) at the top of the keyboard, which brings a touch of magic to a song, difficult to achieve lightness with a synth. Or close agreements or effect "Chorus / Ensemble" makes it particularly certain agreements. But do not abuse it.

I've had 6 years, and it works really well. For an instrument that is 40 years old, it's pretty impressive, I must admit. Before buying it, I still had an ARP Omni, a Korg Trident, a Roland RS-505 and a Korg Delta, all of the instruments also had a "strings" section. In the end, I kept only one: the Solina. The other point I regret is the RS-505 ... he has another tone color, but it is majestic, large, more present than the Solina, the latter being thinner and air.

Prices charged for machinery thongs today are definitely more very reasonable (over 1,000 Euros in some cases), especially in view of their potential and the risk of breakdowns, repairs that can quickly return very expensive.

At the same time, the one who really wants a Solina original sound will not go off the purchase of one of these instruments. So yes, it is a "One Trick Pony", but what he does, he does it very, very well ...

Eminent Solina String Ensemble
4
bought in very good condition 1070 euros (with shipping) in the Netherlands in 2013. nice keyboard without version mk4 stereo chorus disengaged, and led the buttons on the register. Note that the original patent owned Eminent between Arp and Eminent it is exactly the same machines.

with 1 chorus (which is left permanently on) 2 bass registers, 4 strings and 4 sliders obviously was the sound that we want right away, slightly offset placement in the stereo space for registers " Horn "and" Trumpet ".

you buy a Solina for what he does, ie synthetic violins sound extraordinarily well and alone sounds like it, even if other devices are interesting (Logan string, Roland RS202 & 505 Elka Rhapsody ...) and even if Arp omni comes close, if you want a sound Solina, Solina as a buy! Note that I'm talking about the latest model, the Mk4 and it has the ability to output in stereo, with the chorus who wanders slightly but actually use the sound is much better in mono and becomes the true sound Solina that we love so much.

it becomes expensive because of course it remains a string Machine therefore limited, but if you like we want to put everywhere!