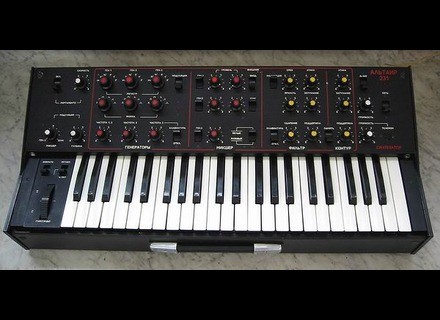 Estradin Altair 231
5
Russian monophonic synthesizer from 1983 to 1984 with 4 octaves.
It is a Minimoog, a replica 98%, same patterns, same values ​​of resistors, same values ​​of condos, a pure copy of the early model D model rather surprising!
We find the same buttons on the front panel and knob in close sth.
For example, the resonance knob is reversed, ie to say that no resonance starboard and to port resonance thoroughly.
A two-position switch for the key follower, all or nothing, in any position you can play with the resonance. Compared mini 3 or 4 positions, so he can easily install a knob at this level to find this feature.
The keyboard has a vibrato function when you move the key.
FYI Estradin the 230 and 231 Altair are the same machines, with the only difference that the Key management is different.
The Altair is much sexier and more compact and stronger above.
It really is super endearing

Regarding the use ditto is a minimoog.
Physically he is fine, I do flank solid wood, it has the mouth and it is compact.
The buttons and knobs are average like the keyboard but much better than Polyvoks, nothing to do with the feel of the knobs minimoog, but the sound is there!
I am pleased to have such a sound in my set, with a Polyvoks for his wacky side, a space echo and poly it's great!
sound typical minimoog's still really fun.

The sound is really very nice, it's minimoog full blast with the possibility of having cheap if you look carefully.
These are the same patterns as the mini but with Russian components!
The filter is beautiful, really beautiful, sweet and present both non-aggressive, they are condos and not chemical ceramics methods manages the resonance, it's not like a Polivoks or Korg or even an andromeda for example (all ceramic) it's very detailed.
on the other hand must change the capacitors, I used panasonic audio, fine. The knobs card also deserve to be replaced especially for tuning the synth. I did not notice any change in tone after these replacements, no.
Found on Ebay Pleiades parts for if, as ampliops transistors, diodes, it is rather easy for motivated, plans exist and are readable, Cyrillic is not a pb.
They remain old new stock, russia have produced too much of the time compared to the demand.
Have specialized on these Russian synthesizers, and I renovated a midified Polyvoks a Aelita and now Altair, Russian mono are quite simple to renovate electronically, they prposent system plug-in cards and components are very accessible, very easily replaceable.
I think I have to be stuck now

Superb, on the other hand should not be afraid to upgrade, I doubt we can have a 231-400 € Altair while nickel.
on the other hand there are people who sell on Ebay retyped for me and for those who would try I would trust 'Polivoks-russia' he look serious but against to pay the price.
It is still 4-6 times cheaper than a real mini having the same type of sound can be slightly colored by the use of Russian components rather than the American, but that I can not make compa I do not have a mini
I put 10/10 for the vintage is top and side Russian synth with components of another block is very attractive

Listen to the 5 audio files about Estradin Altair 231 »