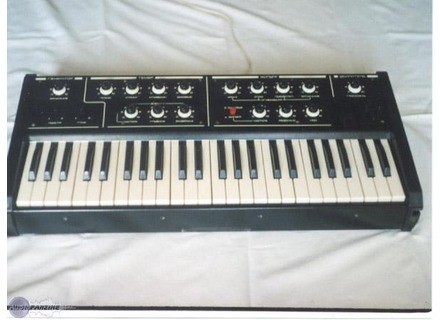 korg800dv's review (This content has been automatically translated from French)

Formanta Radio Factory FAEMI 1 M
2
4 octave keyboard oddly arranged.
Speciality String but with some rudimentary synth polyphonic However, we do not choose the waveform, just a VCF with ADSR / MR and what dose the influence of the envelope. The filter between very very easily self oscillation, it becomes even distorting, but not monitor keyboard unfortunately therefore unusable as such. The envelope is neither fast nor slow, kind Polysix.
The sounds are beautiful it has 4 knobs for volume: a sound I think be the piano string sound (lush string), one of the same style but his pass to high pass filter and nice sharp enough and the synth part that may have its envelope pr user or table if pressing the red button (no it is not sending a missile into the pentagon .. I would have thought!).
We also have a LFO, with speed and amplitude dlai.
Once the sound mixes well doss and you get a great sound (I got in anyway ...)

Configuration could not be more simple condition to have a minimum of visual memory because it is written in a language incomprhensible, is it a code? (No it's actually the Russian of course).
The manual? Ever had.
The edition sounds? er hand, the synth part is much stronger or weaker ...
Ah, if we also did everything left a knob called rverb assay, and RELEASE is good in the notes is just longer and the effect is very nice dja.

While the sounds are simply stunning, it looks like its use in an ARP Omni (I do not want to get shot either but I have one and I find similarities with big synth filter sounds and paraphonique rson strings. of course the sounds are not the same.)

The big big plus is the sound is superb, shuffled all sounds except the piano I succeded recreate a set of harpsichord strings with a little attack in the style heard in the 4 seasons VIVALDI of .... yes yes.
I have a Roland RS09, a Crumar Multiman S, ARP Omni II, and all sound almost the same level string together because they have the same kind of chorus effect etc. to get together, it's him who Faema is simply superb.

Beware if you buy a property ask the seller of the cable outlet that is very special 5-pin DIN plug (the one who sold me his was one and I thank him, he will recognize certainly work.)
It's a keyboard built like a tank, it also means very good tracks of the latter every time you play a note. The keys are of very poor quality and ultra noisy knobs knobs turn more or less in a vacuum if we go too far each end.
The connections are all 5-pin DIN therefore binding,