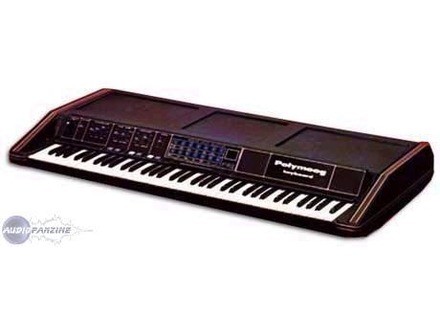 ricochet's review (This content has been automatically translated from French)

It is semi modular, low on the string sounds, organ, violin, although we recognize the grain of Bob Moog SCHULZE even made an article 20 years he was the only synth was the era of reproducing human voices that said you can get sounds weird, but it must lie on it!

Sounds Presset, 8 in all may convincing, are best CRER Presset of a memory that does not have all the shots, also saw the age of 30 years and Polymoog +, it should not be too ask him!

It is a collection of synth, which passed handily in the legends of MOOG, its rating of opportunity can reach more than 1000 euros (if you add pdalier for effects) and the State Power

delsol's review (This content has been automatically translated from French)

Moog Music PolyMoog
1
Ai possd MODEL Synth (in the photo is the Keyboard, only with presets ...) for some years. If the unit (40 kg!) Silent commendable in the 70's, it does no more Submitted intrt now compared to other productions of the mark that still retain a grain inimitable.

Total polyphony! (A plug-in card with note) is that the entire length of the keyboard. Attention intense fragility during transport! The internal cards are easily the trunk ...

Sounds interesting, but about wanting to do research with (as some have said) ...

The've sold a few years ago, as cel could be a price yet honorable.

6 of 13 people found this review helpful

dandy ludique's review (This content has been automatically translated from French)

controllers: two square wave oscilloscope with choice / triangular or both mixtures. modulation, VCF, Resonators, contour and loudness, I did not back the synths analos but he seems relatively complete. the keyboard being splittable most functions are double (lower / upper). an array of Gain (direct mod., res., VCF, to)

connectivity: full I / O that I too lazy to list. taken for the poly pedal that I did not. an XLR output and a line, though.

8 preset sounds that are not the interest of the keyboard it must be said.

I put the keyboard 7, the adaptive controller in the cot splittable keyboard, polyphony of good performance, the outputs.

the least are the presets (but achte an analog for its presets?) and controlers in the form of faders. it works fine but the knobs is so much more class!!

No manual for now. trs is easy to use and yet I know nothing synthse. was resumed "soon" what fader acts on which component of the sound, seems a didactic trs.

this is not a gas plant, one would easily found. the structure about the settings for different parts of the keyboard is well laid out, we do not get lost.

I did not buy this synth to fill a specific role in my compositions, I was looking for an analog for a while, the opportunity presented itself, and voila. but it is clear that the sounds have their place in my components to come. rather intended to ground, yet I get out of a nice trs leads, crystalline on acute or aggressive enough in the grave. was not totally the "fat" moog ... or when you really get into the fine tuning and have what it takes behind in Contents of reverb, delay, distortion see.

the sounds are not realistic but to imitate Soundtrack Series Z dracula kind against the aliens. I get a cot Foley trs cool stuff playing on the VCF, but may be at risk of being a bit repetitive at the moment I get tired of it anyway!)

expression .. ben mine spent 15 years in an attic, so the keyboard will be entitled to a big fat scrub. but instead of aa air quality with settings of the attack and sustain effective trs.

I have not many references in the Contents of analos. So the sound seems trs correct, with the right amount of random image and cot "dirty" to recall here the computer music is not known. pt ^ ^ and like I said a little lack of natural thickness in the bass and a lack of definition to sound clear. That said a risk of evolving when I cleaned and repaired the machine.

I use it for 3 days notice is therefore confirmed.

I love her look up, its controls facade visible and accessible, the keyboard 71 keys (I think) excellent touch, sounds rough, the possibility to adapt ...

I have too much weight force (should be 2 to bring it) that said it holds well on the ground! presets are means Appere fragile at the moment I can not say is it is not out of unscathed from his years of hibernation, but nothing more normal. recupre it every day a little more functionality as if it was coming out of coma (initially it's a blink of paupire, then move the fingers, articulates the words etc)

no relationship quality price since we had almost given me (50 euros) for recess remake I made this choice.