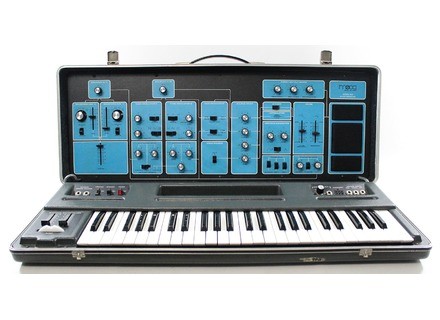 Oliverbass's review (This content has been automatically translated from French)

And as a bonus: Direct Output Mixer allows to inject into the audio signal the raw sound of the oscillators or Ring Mod, unfiltered, without gate (as a HOLD mode)
49-key keyboard.
Glissando & pitch bend (with spring)

The Sonic 6 is mounted in a briefcase made of ABS and has an internal speaker as it was conceived as a synthesizer for the education market and had to be portable.

No MIDI course
To control Sonic in 6 CV / Gate is a special case, the CV IN is the input jack but the CSO through the Gate pin Accessory therefore need tinkering (or find an adapter if there ...)

I do not put that 8 / 10 because with the potential for modulation of the beast, its just a shame to have only one envelope, minimal at that.

Ease of use is one such model.

Programming is a little daunting at first, so the potential for modulation are important, but it is quickly this architecture a bit special, especially since the layout is very clear.
I do not have the manual, it appears not found.
I would love to see out of curiosity but mostly because it is not essential.

The knobs, switches and sliders are good and far between, it's always nice when you have big fingers of bassist ...
The keyboard has a rather nice touch, certainly more than the horrors that are the keyboards of Prodigy or Pro One, for example.

To summarize, we can say that this is the least of Moog Moog.
It's a different sound color, rather raucous and wild.
Ring Modulator and its enormous potential for the modulation rather destined for the manufacture of organic sounds bizarre and only leads silky and flattering.

But the subjectivity of these impressions is reinforced by the fact that there were two different filters that were used in the career of Sonic 6: filter diode original Sonic 5 (developed by Musonics, without any Moogesque influence) and the Moog filter house (bought when Musonics Moog)

In conclusion, I would say it's a synth for those who love programming, with some excellent features:
- The LFO 2 independent
- The great flexibility of the Ring Modulator
- Duophonic mode with adjustable interval
- Triggering notes from the keyboard and / or LFOs
- The ability to add end of the chain the raw sound of the oscillators

It lacks a 2nd envelope generator (ADSR and as to how) to compete with the modular system, which has some strengths, character and a little sound.

I close with the story of his rather unusual designer, Gene Zumcheck, an employee of Bob Moog, who left the company in the late 60's because of major differences with the boss. Recruited by Musonics, he designed there the Sonic 5, which corresponds to the idea that it is a synthesizer, integrated with Bob Moog did not want.
The Sonic 5 does not sell because no Musonics reputation, then the owner bought late 1970 Moog which is worse.
The two companies merge and Gene Zumcheck finds herself to work again with his former boss but tensions persist, and he resigned a second time!
After his departure, the Sonic 5 is slightly adapted and released as the Moog Sonic 6.

20 of 21 people found this review helpful