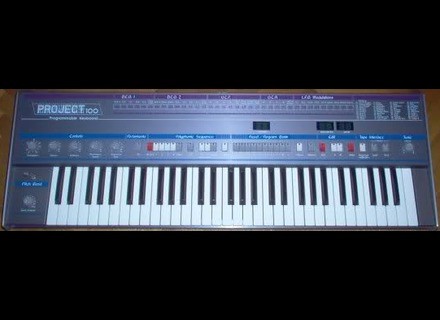 laurent BERGMAN's review (This content has been automatically translated from French)"After over 26 years, I still love her!"

Solton Project 100
5
For specifications, please refer to the Info tab, I filled it for this purpose.

Sorry if I was a little long, I tried to be as concise as possible, to be halfway between an opinion and a test of this synth, including the aspect of its maintenance . I was surprised that this product page was not created yet and I saw this synth I have used for years in a forum where it is considered as rarity, so I wanted to overcome the lack of small information which is the subject this machine.

The use could not be easier and programming is done in the same spirit as the Korg Poly 61, Poly-800, JX series of Roland, the series in Crumar Bit and other machines of the same time, it&#39;s a bit restrictive but we made it a little more direct controls on the front, however, have been welcome, but this mode of input values ​​parameter number for editing was very fashionable in the mid 80&#39;s. That said, the major problem with the edition of Project 100 is the fact that if we choose a parameter, which edits it, then it selects another parameter, the previous setting resets to its initial value ( value which was the parameter before editing it), forcing after editing each parameter to save the preset being edited before selecting another parameter number. Thus it overwrites the original preset being at that location. If you want to preserve the original presets, a back-up is needed on K7 (or WAV audio sequencer). Another detail that differs from most synths today is that the values ​​of some parameters have a range of 0 to 85 (probably due to teething problems of MIDI).

All parameters can be controlled by MIDI (which was great for a synth of this year), some small jumps occur when transferring MIDI data too many, but it is a recurring problem on many machines of the time , so nothing major.

The sequencer can be set to 4 or 8 bars with ability to record in mono or polyphonic, and it has 4 memory slots and a switch "reset".

Some essential functions are of course accessible from the front panel: the transposition (in semitones), brightness (to filter factory presets), the speed of the portamento, the speed of the sequencer, the fine tuning (+ / - 440 Hz) or the operating range of pitch bend.

The keyboard is a little light but can still play fast and accurate.

This synth has a beautiful tone color, the sound is fat, large, pleasant and warm. It has the analog sound, certainly more than just the synth-based VCO, because here it is a synth-based COD. The definite plus is the addition of stereo chorus (which is of excellent workmanship and efficient as well) on the pads / strings or leads. The bass are a bit of nervousness, leads going very well in a mix, the pads are deep and wide. The filter section is excellent and subtle, against it has only one low-pass mode with a slope of 24/dB/oct.

Personally, I find the sound warmer and richer than a poly-61 for example, with a very good presence in the mids / high mids.

Presets from 00 to 39 are factory presets and can not be edited (except with the "Shine" which gives a slight effect of the cutoff), so no access to envelopes of filter / amplitude, LFO, etc. ... . The part from 40 to 99 are reserved for user presets.

This is a rare synth, built in 1985 by Ketron and distributed under the brand Solton, who has a dress both common and atypical (resuming his active physical details of vintage synth legend: how the sides aluminum jupiter -6 / 8, the switches that make me think a little Trident / Synthex, editing screens to Poly-61, etc ...). Obviously, we do a lot better today, that said, I&#39;m not ready to part with him, he has a place in my setup. Besides, I always sound program that I use in my tracks just for fun (ahhh, nostalgia when you hold us).

The construction of the machine is generally quite robust, except for the support of keystrokes plastic (not metal). For the benefit against the concept used to make the keyboard is rather ingenious, is not likely to encounter problems with bad contacts with the touch rubber used by many other synths, including the current ranges, indeed, here in Instead of traditional rubbers, we stems (species of very fine springs and long, semi-rigid) which are welded on a circuit and the Note On / Note Off is triggered by contact when the rod comes into contact with a very fine metal bar whose length corresponds to the length of the keyboard 5 octaves. Each rod used in contact Note On / Note Off is held every key on the keyboard with a small hole in them. Ingenious, as I said before and this greatly facilitates the work in case of oxidation. The keyboard that the Project Team 100 was manufactured by FATAR. Another convenience for maintenance, there several plug-in cards inside, practice in case of problems, most of the chips are placed on stands and not soldered to the PCB.

Selection switches are a bit noisy (a little more than a jupiter 8/Juno 106 for example), screen parameter numbers lack a little contrast (purple characters on gray background are not too readable now and then, by age of the machine so that its user ...).

It is a machine rather successful, which all parameters are controllable via MIDI, which has class, a polished look, but obviously was not a commercial success, probably shunned by "the stamp Solton" which was not a prestigious manufacturer of synths. Funnily enough this "a priori" marks, I remember seeing some who had removed the plate "Elka" of the facade of their Synthex because it did not "Pro" and it was a brand that manufactured organs cheap for the consumer, which co *** laugh!