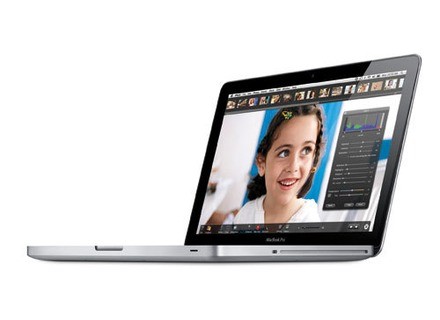 Apple Macbook pro 13"3 2,26Ghz Intel Core 2 Duo
5
The Apple Macbook pro 13"3 2,26Ghz Intel Core 2 Duo is personally my favorite laptop of them all. It's performance, sound, utilities, programs, etc. It's all just too good. What I love about this laptop is the way it works with all the programs. Everything runs so smooth it's a great experience. I also love the sound and image quality. Everything about it is amazing and it's easy to move around. I consider it my work station because i pretty much do everything on it. It does have small cons like all the things in the world. Sometimes, the MacBook lags, because of all the running programs and sometimes it just doesn't respond to anything, but this is only because of all the programs I have. I don't really see this as a problem, since if you overload the machine, that's what will happen and it only happens sometimes. The value of it is excellent. I know 1200 dollars is really a lot of money, but it's the cheapest out there and it's great. You don't want to buy the old MacBooks to make music because of their poor performance and the Apple Macbook pro 13"3 2,26Ghz Intel Core 2 Duo is probably the best choice. Some may argue that the desktop Macs and the other versions are better, but you can't move them around so easily and their performance isn't that big of a difference, it just has a lot more space which isn't a big of a deal since the Apple Macbook pro 13"3 2,26Ghz Intel Core 2 Duo has about 120 GB of space. If you want to be a DJ/Producer you need a portable machine. The sound quality couldn't be better. When you listen with headphones, the sound quality is excellent. When you play the sound out through the MacBook's speakers, it's pretty good, you can hear all of the song except for low frequency sounds like the bass among others. This was my first Mac model I tried. Before, I had a Windows laptop, and it's nothing compared to the Apple Macbook pro 13"3 2,26Ghz Intel Core 2 Duo. You should definitely buy this laptop out of all of them, it will change your life.
Did you find this review helpful?yesno
»

korosif69's review (This content has been automatically translated from French)" macbook"

Apple Macbook pro 13"3 2,26Ghz Intel Core 2 Duo
5
How long have you use it?
3 years.
What is the particular feature you like best and least?
the +
-Very stable.
-The battery lasts long.
the -
-Not see
How would you rate the quality / price?
it is a bit pricey, but hey it is a good bike.

With experience, you do again this choice? ...
yes.

I like his Aesthetics, its effectiveness. I chose the MODEL 13 "for its compactness because the goal is to make the sound (I use Audacity, Cubase LE4, Ardour2, logic express and probably later ... sometimes I ' uses "pure 2-track" audiorecord)) and the acoustic measurement (FuzzMeasure).

For the sound, I used up a Terratec Phase Submitted x24 fw which fails. Trs damage has sounded good.
I think acqurir a Fireface 400, Alesis or IO/26. I manufactured a microphone prampli 2 tracks, taking up the philosophy of prampli Fidelta (I dvelopp dj) but going much further. I probably dvelopperais converter in the future.

And the acoustic measurement, I intend to use a bte THE T. BONE MICPLUG USB go well with a lot of application, and it's very portable.
I ordered the MacBook Pro with a 120 GB SSD, and I install 4 GB of ram. was running well, it's fast, even faster trs. And I install SnowLeopard, which is more fluid than ractif and Leopard, not bad.

I also possde MacMini Intel Core Duo 1.6 GHz 2GB ram (with Tiger and Snow lopard on 2 partitions), I could use various MacBook, PowerBook, iMac, PowerMac and no particular problem.

The report price may sound quality may be less good for the world "non-apple", but when I compare - on average - the time I pass "galrer" (almost zero) than users PC and Linux, in perspective.

Sr is that for now, I do not want to make other choices.
Did you find this review helpful?yesno
»

vincislex's review (This content has been automatically translated from French)

I play music in "amateur" and I always worked a PC = the choice has become home computer ... 20 years it lasts.

And then I met ... Live Intro need to buy a computer "modern".

So the Mac has quickly become ... My budget revolving around 1,000 €, the choice was quickly ported to the MacBook Pro 13 "... and I hesitated with an iMac 21" (but I needed a laptop) or a MacBook Pro 15 "much more powerful but much more expensive too.

Today I do not regret my choice. Live runs perfectly and far from saturation for the purpose I have today ...

- Boot in 30 seconds
- Silent (important for zicos)
- Very low latency
- The nickel (with headphones plugged into an amp + speaker)
- No galley installation or incompatibility
- Beautiful, beautiful it is
- Duty battery
- OS X: it is so simple that PCistes in my style is a little confused. Never be confirmed, say ok or answer "Are you sure" ... It's really nickel
- Quality of the screen. Despite its small size, it has a good resolution ... Anyway it is small. If you choose the apps to multiple windows ... you will suffer. Ableton Live is already a success for it ... All in only one screen.
- Attention to detail. It's Apple. It's beautiful and functional ... and, for example, the charger is tiny, lightweight design ...
- Track pad multitouch ... You can really do without mouse, even if I bought a ... while the laptops are "unmanageable" without a mouse, here ... is really nickel and was full of "features" while playing with a 4-finger ...

Disadvantages:
- The HDD only runs at 5400 rpm ... it can be boring ... but nothing prevents to replace a 7200 show an SSD.
- No separate audio input! A heresy when it is present on other MacBook Pro 15 "and 17" ... I realized after ... GRRRR!! So I was forced to buy an audio interface ...
- 2 USB ports. Also a stingy with our time! 3 would have been minimal.
- Glossy screen. Until it does me no problem ... but it could be one day ...
Since I have I live completely differently. This MacBook Pro 13 "will follow me everywhere and I do not have to worry about" IT "(fix bugs in Windows) but to learn and benefit from the programs that interest me. And for a" amateur "who has little time to devote to music ... the fact that it starts like clockwork, it does not crash and it works wonderfully is a true happiness that is well worth the price difference, even though it's expensive ...

It is clear that never in my life I never buy anything but a Mac ... No more PC's, ended the galleys and bullshit .... hours trying to dip it why not work as explained in the manuals ... FYI ... I need to transfer my data from PC to Mac, and given the weak capacity of the HDD in the MacBook Pro I bought a USB 2.0 external HDD and ethernet (LaCie Network Space 2) ... The MacBook Pro was immediately recognized and the old iMac as ... so I can work in a network without having to make any thing but to follow the 2-3 steps very fast. Well ... unable to access network HDD to PC ... And I have already spent hours!! I'll have to transfer all my data very carefully and with USB ...

A word to the wise.

To all those (and those) who hesitates when you pay the difference between a PC and a Mac ... wait a bit to expand your budget ... Blessed with the fingers a computer running smoothly is always a joy and serenity really important for recreation, I think.

Besides, I do not understand why the Mac does not raffle the market ...