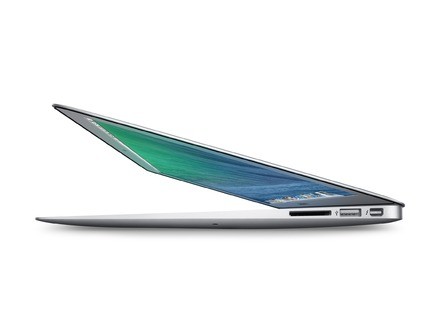 MacBook Air, Apple Laptop from Apple in the MacBook series.

Apple MacBook Air
5
I use it for 1 week.
I've had other laptops apple but it exceeds all others.

Speed ​​applications and use the output of the previous day.
Movements at the trackpad to scroll through web pages (as well as in other applications) as well as others that I have not yet fully integrated.
Speed ​​of the setup, it is ready in a few minutes.
The battery, theoretical 7am to see over time.
The SD card slot to import my photos from my camera, or use the SD card as temporary storage.

For me, the more negative is the obligation to connect the Macbook Air on the sector to be able to use an external screen closed, while Apple does not recommend the use of extended sector to conserve battery life.
The speed at startup and when it is completely off. It is not as fast as I would have thought. This is a lesser evil because it is usually left on standby all the time. In this case, it's instant.
To take full advantage of the connection to devices such as USB3 or thunderbolt, these devices must be in these standards, it makes sense. But we are a little disappointed on the spot as it is expected to be something super fast and we forget that this is only possible with newer devices. I made big moves and it took a little time, even if it is faster than the MacPro. For example, I ran for timemachine Backuper my internal hard drive on an external hard drive via USB 2 (presumably) and it took 30 to 40 minutes for 50GB.

sparcman's review (This content has been automatically translated from French)

A small hinged flap to accommodate
-Video output (which looks like a usb a little wider, I forgot the name), a USB-
-A jack 3.5 mm
all with an edge.

In addition, the sound input is MONO by the same jack. Therefore an adapter for the exit and entry at the same time .. I did not even want to try!

Other details: The machine is very poorly ventilated and very hot, I've seen that a year and planting of overheating after a morning! Sometimes we really do not want to leave their hands on or put it on her knees!

Its detail: it is funny, the sound comes out between the key up and key down! on the other hand is a bit disturbing because the source of sound is not centered in the screen.

Otherwise, the screen, keyboard (backlit, that's cool) and the touchpad (though large) are nice (provided you like the mac keyboard). The LED dimming of the screen is noticeable, however, and can be unpleasant (though at least ACER).

Except that is, it is very thin, has little disk space, average power, and defects / attributes of a mac. I do not like the cooldown longer when the machine is on.

I think it's a netbook very light / compact, but that's all, nothing special with 3H and lack of autonomy in MacOS since this hybrid sleep on windows vista. Suddenly, in one night can easily lose 30% of battery by leaving the mac to sleep .. FAIL

I have one available, but frankly, I will not buy it!