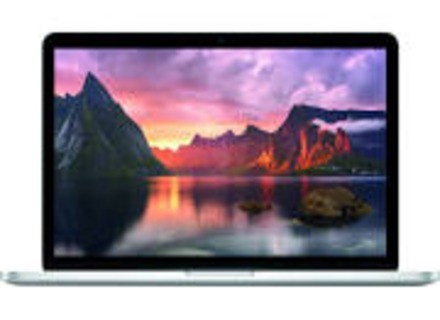 Apple MacBook Pro 15" 2GHz
5
The Apple Macbook Pro is probably Apple’s most popular and famous laptop. They did their best to combine both form and function in a total package that assists power users. This particular laptop has a 2 GHz quad-core Intel i7 processor with 4 GB of RAM, a 500 GB hard drive, an Intel HD Graphics 3000 along with an AMD Radeon HD 6490M with 256 MB of RAM.

The machine itself is extremely sturdy thanks to Apple’s patented unibody aluminum design. The laptop is carved out of one solid piece of aluminum to provide strength and stability that most other laptops seem to lack. Everything is clean on the laptop, including the closing mechanism. It’s actually a hidden magnet that helps keep the lid locked shut. The keyboard has been upgraded and is now a special chiclet key style keyboard to aid in typing.

The coolest feature that this laptop has is the ability to toggle between the graphics cards. When doing normal day-to-day tasks, the Intel graphics card does the brunt of the work. This helps save on battery life and allows it to run cooler. When it’s time to run a heavy graphical program or game, the computer will switch to the AMD Radeon HD 6750M for maximum power. This sucks the battery life faster, but it gives a huge boost in graphical power.

The 15’’ is probably one of the best models in the entire lineup as it’s not too small, and it’s not too big. The 13’’ is a bit small for certain tasks, especially when you start using the professional applications such as Logic Pro. The 17’’ has some nice extra screen space, but I find it’s a huge pain to travel with given its bulkier size. If you’re in the need for a new Apple laptop, I highly recommend picking up this model.

patricereal's review (This content has been automatically translated from French)

Apple MacBook Pro 15" 2GHz
5
I use it as a pro for photo and video décemdre since 2009 at home and on the field, I work in video in full HD XDCAM, ie it is heavily used, I ' I never had any problems heating or crash ... I bought it used like new, it was a month and a half and therefore still under warranty. For my part, and in these conditions it has excellent value for money. I gave him added an external display and many discs 1T everything works for the better ... My G5 with 8 GB of ram is at rest since I have this laptop is tell you!
A powerful tool that I'm not ready to leave! I would do this all the choices he has the drive and integrated SxS field is perfect ... Clips or recordings of concerts, he never made me lurch.
Its limit ... The computation time in post-production effects and heavy on the color treatments ... But for this, no phone can match or even a G5 4 core XDCam HD 422 ...
Did you find this review helpful?yesno
»

maxonz's review (This content has been automatically translated from French)

Bah and it is clear that wrongly ... This edition MacBook Pro 2011 Thuderbolt has many defects due to its processor architecture and Sandy Bridge included in the new series by Apple, despite the defect found on this platform a few weeks before the start of marketing.

Clearly, the i7 processor consumes the equivalent of 150W, even though the MagSafe adapter is able to provide only 90W maximum.
Consequently, when the processor is heavily used, the battery has to come to the reinforcement of the sector, thus undermining its lifetime.
In addition, and that's his biggest flaw, the MacBook Pro 2011 is more suitable in terms of its design as the i7 heater, a lot. Outside, the unibody with no outflows of ventilation does not allow proper ventilation, causing overheating of the processor and a reboot of the computer to automatically lower the high CPU.

So, to summarize, it is obvious that I tiendas away from Apple next time, and me knowing computer, I can assure you that you can go and pay a giant Toshiba rotten to 400 € You get the same quality, just the design and less.
Did you find this review helpful?yesno
»