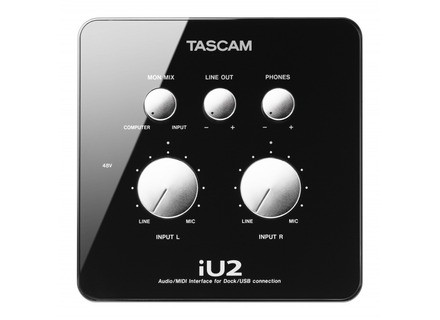 iU2 Audio/MIDI Interface for iOS, Audio or MIDI interface for tablet/iDevice from Tascam.

Average Score:2.0( 2/5 based on 6 reviews )
Value For Money : Excellent
Not satisfied with those reviews?
Our members also liked:

Tascam iU2 Audio/MIDI Interface for iOS
1
I bought in 2012 this interface to be mobile with my Ipad, really impressed by the concept I do not expect extraordinary quality but at least it works. This is not the case.
Lunchtime walk horribly evil in and out.
The plant interface every ten minutes making noises unbearable noise.
At first I thought the problem was related to the ios but Maj have no answers, I bitterly regret not having sent this stuff as soon as it happened. The money thrown in the trash, pure and simple.

efabric's review (This content has been automatically translated from French)" correct"

Tascam iU2 Audio/MIDI Interface for iOS
4
I just wanted to correct a few things here, because I just get it and test it with an iPhone 4S. For me it works.
The sound quality is not stunning, but much better than the internal microphone or a guitar interface type iRig (to plug into the headphone jack). Note that I needed to mount the potentiometers mic and guitar (squier stratocaster and microphone sm 58 types) than quarter of the race before it clipped. Strange.
No pest problem. No latency problem. Just remember to disable the monitoring of the track if you activate direct monitoring.
The headphone output is much better than the iPhone, or as a laptop. It grows reasonably strong headphone yet demanding: BeyerDynamic DT880 250 Ohms.
In practice, one must connect in order if it is not recognized:
We start the app (garageband in my case)
Connection of interface
Is connected microphones, MIDI, and possibly food, which recharges the iphone well.
MIDI works well with keyboards. A feast chopper finally nuances, and have a physical interface. on the other hand I have no pitch bend or modulation, or controllers. An info on this?

I had to reconnect it once or twice, but it came from my midi keyboard that needed a firmware update. I still miss a step back on its stability over time, or live. I still captured many voices, chorus and guitar on every song. It works without a problem.

In fact, the cable is too short of a few centimeters, it is not zero but a bit unbearable in mobility.
pity that there is no ASIO drivers for PC, and the interface is no longer present on the site Tascam (a problem with the trial U2?)
Well, I go back, I have to finish a piece.

Tascam iU2 Audio/MIDI Interface for iOS
1
I acquired this new interface IU2 for two uses:
1) Register on iPad (3) stereo (line or mic)
2) driving a synths or midi "old" does not have a USB port.

1st function: the iPad does not recognize that rarely Tascam interface. Must disconnect / reconnect often, which quickly becomes annoying. When the link is finally established, the sound is often chopped or saturated. I have not been able to find a solution against it even after several hours of investigation.

Second function: MIDI side, no nothing. Unable to send or receive an order twelve o'clock or from the iPad. While in USB it works very well. The interface is non-existent in MIDI yet tested with a dozen dedicated apps.
After 1/2h hotline with competent yet very large music store, the technician himself could not speak to its interface.

So I returned the case in exchange for a credit.

Advice, do not buy this product, its design is missed it ... it happens.

Tascam iU2 Audio/MIDI Interface for iOS
2
I used it a day. This card is very good on paper but does not work ... terrible The card is recognized from time to time on the ipad. On the box, it is sold for iPad 1 and 2 and I 3, I thought that it might be that since it worked great on the iPhone 4s. But after a while can not be recognized on the iphone too.
The card works great with usb but if it is to plug in usb, was spoiled for choice. Value for money okay but I would have preferred a map 24bits.
Ipad on 3, I also problems Buffer I did not usb.
I do not understand why this card is no longer on the manufacturer's website and nobody talks on the net ...
I do not recommend this article on the same pc as no asio.

UniSon's review (This content has been automatically translated from French)" Not so with iPad .."

Tascam iU2 Audio/MIDI Interface for iOS
This is the first time I leave a notice because usually I buy good quality gear and I'm never surprised.

All in all I tried three different small USB adapter ...

Finding made I decided to invest more in my way to an interface that can be plugged directly into the doc ipad.
After I realized that being the IO dock was not really an audio interface I discovered this little tascam. I say cool to less than 100 € on Thomann for € 160 in France is great. I must say that the product I bought was a stock-B in perfect condition sold by Thomann after test.

The interface on this is plastic but it is not what interests me. Until the connection is there!

The problem is that the interface is logged out alone and it is sometimes impossible to reconnect for several minutes! This problem might be due to a defect of this particular interface.

The really stuck where it is that when the card still connected to the ipad, and it could last for hours, the sound began to crack. As when the buffer size is too low on a computer with a sound card low end. Once IU2 creaked, the only way was to disconnect the ipad and restart.

Now I use a USB hub card reader for iPad powered USB hub. So you can really connect any USB is class compliant gear.

Good idea but not so! (At least that I had really had a particular problem, but I do not think so)

ipad ipod compatibility is a plus, the sound quality is also very good preamps for this price range. Tascam has long been a major audio brands and is able to get very good products