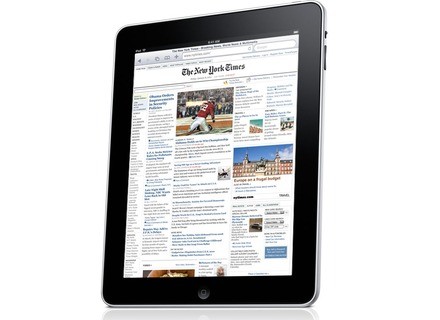 iPad, Touch tablet from Apple in the iPad series.

Apple iPad
4
When I was a little kid I remember when Apple came out with the Newton. It was not very well received and died off pretty quickly. When the Ipad was announced many people thought it would be another Newton. There had been tablets on the market already but most of them were laptop based with reverseable screens. Apple decided to make its own tablet that is just a tablet. They put out a lightweight device with a large screen that doubled as the keyboard. This device is more like a large ipod touch than a normal laptop based tablets. The device is much easier to carry around than a laptop so it is more portable. For the simple things it does it does them very well on a base level it is more reliable than a laptop. Many people were critical of this device when it came out because it didnt really have any purpose. Since it is a closed device you have less control over the operating system than you do with a real laptop. All the applications have to come through the Apple system and Apple has strong restrictions on what applications can do. But it seems Apple has created an industry for it when it came out. There are millions of applications and games for the device and it can be used for many different things. Recently some music and guitar applications have come out and you can use it with your guitar rig. There are applications and special cables that let you plug your guitar into the device and use the device as a simple amp modeler. There are many different versions of the Ipad out nowadays and the prices vary widely. Think about what you will use it for and what features you need. If you dont need 3g than you can save hundreds of dollars.
Did you find this review helpful?yesno
»

Apple iPad
4
The Apple iPad is Apple’s first jump into the tablet world, and they took an interesting twist on it. Instead of having a laptop that doubles as a touch screen tablet, they ditched the keyboard all together in favor of a lightweight touch screen with some flash memory built-in, along with a special smart phone processor.

Since this device came out, I’ve been critical of it. For one, I have no real use for it, but it seems to have created one huge hype machine that has left everyone else struggling to compete with Apple in the new touch pad tablet market. The first thing you notice when you pick the device up is that it’s light. That’s probably its biggest advantage compared to laptops more than anything else. Besides its iOS geared for lightweight browser work, the device itself isn’t cumbersome to use every day. It’s easier and faster than booting up a laptop or netbook, and it can do the features that many of those lower end laptops can do.

You don’t have total free reign over the OS like you do with a normal laptop, and that’s part of its appeal. You have specific apps you use, just like with Apple’s very own iPhone. This allows people to not have to worry about figuring out file paths for different files, finding out what’s compatible, etc. One of the coolest features I’ve found is that you can use this as its own mixing device in conjunction with Logic Pro. That app alone almost makes it worth it.

If you’re going to get the iPad, you might be better off with the first generation version as it’s cheaper and has somewhat similar performance. I also don’t think the 3G is worth it, but it depends on if you need to always be downloading your ebooks wherever you may be.

Daeth's review (This content has been automatically translated from French)" Essential"

Apple iPad
5
I can only recommend the use of the iPad in the studio, mobile or not!
Not particularly fond of the Apple brand (or refractory), the musical possibilities are increasingly present!
by coupling an external interface (purchased 30 € to the apple store) and AmpliTube, guitarists have something to burst. More viable sequencers (the Meteor compatible audiobus) have appeared.
While it is still expensive (I bought the iPad retina), but value for money is unbeatable for a tablet. In addition, the latency is very low compared to other OS

Apple iPad
1
I do not use it. I had the opportunity to use it simply, and I wanted to give my opinion on this crap.

Perfect for work bureauti ... not ha ... tapping on a touchscreen is really crap actually ... and try to point out anything in a really precise (photoshop, ect) without a mouse falls within the challenge. But on the other hand, it is very effective for intern ... either ... in fact it is highly interdependent on the speed of the network, which is not fantastic in Switzerland. At rush hour, for example, one is often confronted with very long loading times for simple navigation, not even need to think about multimedia use. At worst, the width of the slab is sufficient to quell the previously recorded video. But almost everywhere, it is illegal and very expensive. It depends.
So it can be used for the studio? Yes ... of course! And it also works well as a good turn mac pro ... actually no, again this is crap. You can try to make the acquisition of 8 tracks via sound card lynx with this stuff ... I am not convinced that it works (can we connect??). We did the same, but on two tracks via a special connector, and we already had a lot of lag, forcing them to reduce the quality of acquisition and limit its effects. Otherwise, as mentioned by others, there are interface for these tasks, but they are a deplorable average. As MIDI controller, you can consult the reviews below, I have not even needed.

By-cons, you can make full of useless stuff with, like playing Angry Birds, call, take photos. Everything you can already do on mobile good quality, but you pay the air con.

Seriously, this ... a tablet computer is neither able nor decent mobile phone or a camera. This is a transgender who falls flat in almost all situations.

Furthermore, the buyer INDIRECTLY INVOLVED IN SUICIDE OF TENS OF EMPLOYEES abused, encourages the Nazi policy of apple and makes co-responsible for mistreatment of human beings.

So it will be without me.

Edit: eight persons indirectly involved in suicide dozens of employees have not found my review helpful. Thank you to the other two.

16 of 39 people found this review helpful

Did you find this review helpful?yesno
»
Read the 13 user reviews on the Apple iPad »

Apple iPad Coming Up in Europe

Published on 05/10/10
Almost two months after its official US release, Europe is next: iPad will be available in France, Germany, Italy, Spain, Switzerland and the UK on Friday, May 28.

View all 21 videos of Apple iPad »