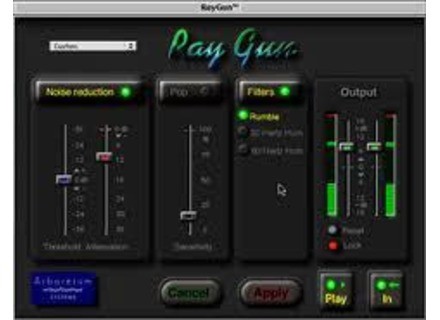 Arboretum Systems Ray Gun
4
The Arboretum Systems Ray Gun plug-in is a simple noise reduction plug-in that I used to run when I was running my DAW with Cubase SX. I honestly don't remember how I got the plug-in, but I ended up using it a good amount, or at least whenever I would need some noise reduction here and there. I'm pretty sure that this plug-in isn't available in any capacity any more, but I was running a Direct X version of it on a PC when I had it. I don't remember having any problems with installation, but it's been a few years. The interface of the software isn't very complicated. There is a section for noise reduction, which consists of sliders for threshold and attenuation, then there is also a pop reduction slider, as well as high pass filter options at 50 Hz, 60 Hz, and a rumble option, which is probably around 20 - 30 Hz. It also has stereo output levelers and bypass options.

I can't recall every having a problem with the performance of the Arboretum Systems Ray Gun plug-in. I was running it in Cubase SX 2.0 and 3 on a Hewlett Packard Pavilion dv8000 that had a 3.0 Ghz processor and 2 GB of RAM to work with. This was definitely an adequate system for running the plug-in, as I never had a need to run more than one instance of the plug-in within a single session anyway. Most users should be fine here, but since every system is different it's hard to say exactly how well a plug-in will run without just trying it.

While not a groundbreaking plug-in or anything like that, the Arboretum Systems Ray Gun noise reduction plug does the job more than okay. It's almost fool proof to use and allows for getting out unwanted noise, clicks, or pops from your recordings. I don't really remember how I got this plug-in, but I believe it was in a homemade plug-in pack that I bought from someone. If you can get a free or cheap download of this plug-in, and I'm not sure that you can, it's definitely worth having around if you think you might need it.
Did you find this review helpful?yesno
»