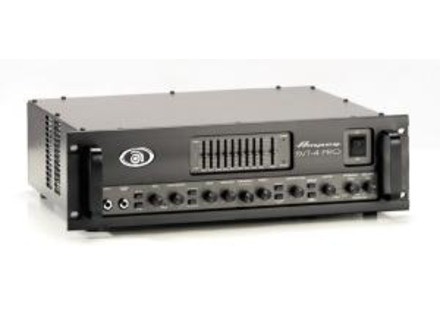 Ampeg SVT-4 Pro
5
Upon moving away from California (and coming into a large signing bonus- $$$), I felt it necessary to upgrade my GK 400RB to the 4Pro. This transaction set me back ~$1100 from Guitar Center.

The tone is great. Ample EQ control. The low end is enough to force a bowel movement. I typically run through an ART effects processer (using it as a preamp with a light touch of reverb/chorus, etc.), but running dry almost forced my hand into pawning off the ART.

The volume is pretty decent, but might use more power. This could be an artifact of my cab (currently a SWR GoliathIII), or limitations of the processer). It's also a little heavy, but perhaps that's a call for me to hit the gym.

This amp works for me. Enough power for what I'm doing, and quite a bit of versatility. I'd almost say it's worth its weight in gold, if you can carry that.

Ampeg SVT-4 Pro
5
I purchased this unit as a new blem from a music dealer in NE Oklahoma. I paid a little under a grand for it. I need a unit that would give more power in order to cut through the mix in the clubs.

I like the power and versatility of the head. It has plenty of power with power to spare. The tone is wonderful and the sound can be altered for any song, or situation. This thing makes more different sounds than any other that I tried out. I have it hooked in with a SVT210HE and an SVT18 cab. I have ran it both bi-amp full range and bi-amp HI-LOW and it works well both ways. I am currently trying to acquire an SVT-810 cab so that I have the capability to run it mono balls to the wall.

I like eveything about the unit. If I could change anything I would ask for better knob protection. I have no problem with the way it is because I have it racked in an SKB case, however if it was not racked you would need to be very carefull not to damage the knobs due to the weight of the head.

I am very pleased with the quality and construction. The curved front face seems to really strengthen the whole thing. The rest is built of what seems to be very adequate gauge sheet metal. The jacks seem to be of very good quality and are smooth and give a good positive locked feel when pluged in.

I really enjoy this head and am now sold on Ampeg sound and quality. I can't see myself ever buying another head unless this one breaks beyond repair or I find myself needing two.

Ampeg SVT-4 Pro
5
I was looking for a large, collusium quality amp with many tonal features
Price Paid:A total steal $1400 Canadian
I aquired an Svt4 Pro Amp head and a 810e Classic enclosure off a friend of mine

I like the 9 band equalizer and the fact you can engage, disengage it with a pedal. I was mainly looking for an amp with many different tonal features for the number of different soloing styles I do, Cliff Burton is one of my biggest insparations, so the harmonics and sustain are great. Most importantly it is LOUD. 1600 watts @ mono briged it more power than you'd ever handle. The 10" speakers sound amazing with great punch and don't "fart" when overdriven.

The only problem I had with it is one of the wheels bent on the enclosure so I just went to crappy tire and replaced them with heavy duty casters. The enclosure is litteraly like loading a coffin into your car but this no compliant, If you spend $1200 on any 8x10 enclosure your gonna have to deal with over 160lbs of dead wieght. The head is absolutly great no complaints.

Other than the wheel problem, the rig is really sturdy. As far as the durability of the head goes, LOOK AFTER IT!! It is not bullet proof, if you drop it or mistreat it be prepared to buy preamp tubes as well as getting it fixed buy a technichian. If you par the list price for it (1799$) you should instinctivley know to take care of it.

I would absolutly recommend this amp to any professional or amatuer with alot of money 100 times over. If you look after it you will never have a problem with it. The only thing is I would advise agianst rackmounting it. Unless there is a case out there with vents on the side, if you rackmount it the fan vents will be blocked and I am assuming the system would overheat rather Quickly.

Ampeg SVT-4 Pro
1
I received an SVT 4 Pro through Ampeg's Artist Relations Dept. I ran it through every possible combination listed in the owners manual while using Ampeg SVT410HLF and SVT210HE cabs. I set the pre amp volume so that the clip light came on during the strongest signals as recommended in the owners manual. I had to turn the master up to 3/4 or higher in order to be heard with a relatively low stage volume blues band. I returned the head and received another one and had the same problem. I went to a local music store and played through their's and also was unable to obtain an acceptable volume level. In fact my GK 800 RB has more balls! After calling Ampeg, I traded my cabinets in for an SVT 810. I still must crank the volume to over 3/4 in order to be heard clearly even during rehearsal. We are not a loud band. The most I ever turned my GK up was to 1/2 and that was at an outdoor gig. I am disappointed by the lack of balls the SVT4PRO has. I expected more. I have run it bi-amped, mono, stereo, bridged and I still can't get the volume that I should. The tone is phenomenal but what good is it if you can't hear it. I am playing quality basses, 76 Fender Precision, 78 Fender Jazz and Musicman Stingray 5 String with active electronics. If I push in the DB pad button while using the Musicman (as recommended for active electronics), I can barely hear it at all. I expected much much more from Ampeg. I used vintage tube heads for years and I am disappointed with the current Ampeg product line.


This review was originally published on http://www.musicgearreview.com
Did you find this review helpful?yesno
»
Read the 10 user reviews on the Ampeg SVT-4 Pro »