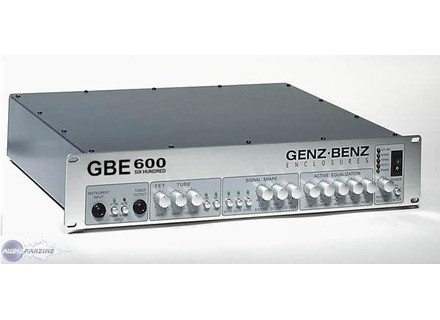 Genz-Benz GBE 600
5
I bought this amp brand new from the Bass Palace in Scranton, PA for $780 USD including the rack sleeve for portability. I was told by a couple of others in the biz that this is "the one". So currently being the owner of an Aguilar DB-750, and in the market for a good quality backup, I had to hear for myself.

Killer Tone, Tons of Volume, Amazing Versatility, Decent Weight. What was originally purchased as a backup has now become my main amp. Its not as loud as the Aguilar 750, but if Genz Benz came out with a 1000 watt version of the GBE600, it would be the Ultimate! If you can't get a great tone out of this amp, STOP PLAYING! You can tell this amp was designed by a bass player.

Customer Service A++++!! The amp took a nasty crash out of the van. A fall that would have proved fatal to ANY AMP! After replacing the preamp tube, I was curious as to whether it still worked. I switched it on and it literally burst into flames! I called Genz Benz, sent it to them (med rare) to rebuild, got it back in 2 weeks totally rebuilt and fixed it under warranty!!! I did not expect that and maybe the letter I enclosed professing my love for the amp touched their hearts. But even if it wasn't covered, the overall experience of the repair was very pleasant.

They thought of everything!

Although manufactured in Taiwan, the construction and quality is second to none. Even though it was rebuilt once, it was at no fault to Genz Benz whatsoever. NO AMP WOULD HAVE SURVIVED THAT CRASH!

The power rating they give it is VERY CONSERVATIVE....

Please consider adding this amp to your "gotta try it out" list and compare it to any amp in any price point. I think you would feel the same way I do...