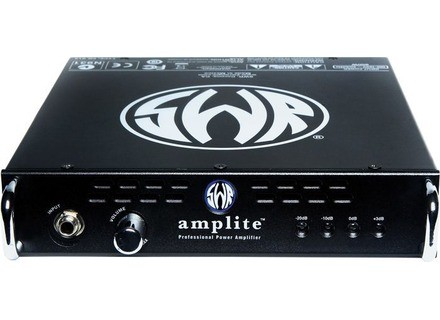 Light Headed But Fully Packed On today's menu, to get rid of the cold and warm up, we have a light but nourishing pair of SWR class-D heads (an amp/preamp combo and a power amplifier). Read more…

-kc-'s review (This content has been automatically translated from French)

SWR Amplite
5
Class D power amp, 400w 4ohms to 1.3 kg in only after the manufacturer.
-1 / OFF button on the back, a volume in the front.
-1 Input jack on the front and a secondary input jack / XLR in the back.
-2 Speakon speaker outputs in the rear (min. 4ohms)
-LEDs to display the input signal
- ... and that's it! just enough, nothing more!

mine came with the cable hp! I ordered one for nothing ... it's stupid but it's a good point anyway!

Cons by the power button to stop the back is not very practical once Rack ...

-Edit-
After having contacted SWR, I had confirmation that we can leave the switch permanently amplite and turn on / off with a strip interuptor without problem! So it's cool.

Use ... bah preamp input, a speaker or 2x 4ohms 8ohms downstream and shoo!
4 LEDs in the facade restless to see the level of the input signal, adjusting the volume to avoid getting into the red.

The amplite does not seem to color my sound is everything I expected. staining is the role of my preamp (SansAmp RBI) of my cabinet (Ampeg 4x10 or 2x10 warwick by the venue), my bass (warwick jazzman), and my fingers.

to be confirmed once I deepened my test Repeat '/ concert, but it looks to me to send as much as my SWR SM400 head which I used power amp until now, while lighter and less bulky. It was the purpose of my purchase

-Edit-
In fact it sounds pretty strong, the problem without replacing amplite SM400 my head! I have fallen in the wrong cons of acute my cabinet, drawn in the tended to slap tear eardrums ...!

I will publish my review once I've explored a bit more capabilities of this amp, but for now I'm happy

-Edit-
This small power amp is really nice, efficient and a weight and a reduced footprint really!

See all 37 photos of SWR Amplite »

Listen to the 10 audio files about SWR Amplite »