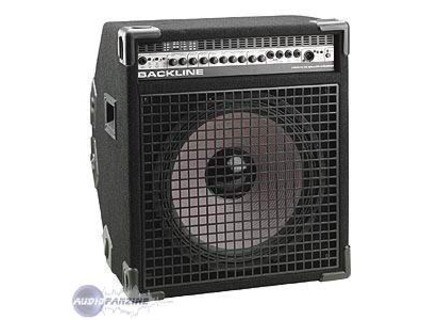 Gallien Krueger Backline 115
4
I bought this amp brand new in a store in Sweden, where I live. The reason for this purchase was simply that I needed a new amp, my old one didn't sound good anymore.
The price was 6750 swedish kronor = about 850 dollars.

Great sound - nice and warm. The amp is quite easy to use, not to complicated. The eq has knobs for low, mid and high and contour. Of course you've also got a level and master volume control.

The amp has 125W in it which is enough for me. When we play at parties and such we always use a PA to run our sound through, but the amp makes enough noise to stand for itself at smaller places.
A good thing with the amp is that you can choose to go pre- or posteq when you use a PA.

Another fun thing (but unnecessary) is that it has two channels - the normal one and one for distortion. The dist channel is fun to play around with but I'll never use it when I play with the band. Maybe someone else can find use for it. But not me.

The amp has side handles which are great when carrying the amp. Nice move, GK!

The on/off button doesn't feel so reliable. Press in and it's on and then press it again and it's off. But somehow I get the feeling that the on/off button one day is going to stuck inside the amp. I hope not, though. But it could have been done better, why not a normal on/off swith - I/O? You know, the orange one.

The biggest thing I don't like is that I had to return to the store twice to change the amp to get one that worked alright. Quality problems, GK?

Well, as mentioned above I had to return twice to the store to change amps. The third one (brand new, all of them) sounded OK. Bad luck och bad quality? I don't know. The first one made a strange rattling sound, totally unplayable, like a screw was loose inside. The second one had a flat strange sound and had a distorted effect when played on low volumes. The third one, at last, sounded great. But my trust for GK is not so good anymore, sorry to say.
Anyway, the construction is beefy enough - no problems there. I already mentioned the on/off button and my feelings of bad quality there.

An amp that sounds great, no doubt - if you get one that works alright. I compared it with some other amps and the GK was no doubt the best sounding.
Except for some doubt about the quality I would recommend this amp for everyone.

Watchardos's review (This content has been automatically translated from French)

Gallien Krueger Backline 115
5
Transistor amplifier 125 watts 8ohm
Direct out: XLR, Ground Lift and Pre / Post Switches.
4-band active equalizer
overdrive
in short everything you need for the home studio, playing in a group or to make scne
and also small advantage, it does not too heavy PSE

Good use, a password alone for a powerful sound, moving from one channel to another by pedals (sold spare of course) and the small button "mute is handy when you want notament recorded by direct sortiie without making too much noise

Sounds really good, nothing to do (I think) with Hartke found in the same price
I play it with a warwick thumb bass and jazz bass marcus miller and groove as well as can have a powerful sound to play metal or rock.
level recording has gone very well too, as the direct output quite correct

I use it only for four months but I'm so happy I wanted to share it, I bought a 712 euro which is still right now we have to see if it holds at any Anns case if it is I do not intend to change

Darka666's review (This content has been automatically translated from French)

Gallien Krueger Backline 115
4
I believe that everything said in the opinion t Previous regarding the official CHARACTERISTICS. Then it should be noted that REALLY reached the 125 Watts, which is not forcment empty. The saturation is a little more amp possdent. This is the abscence of compressor and tweeter that I have got most of the amp later.

Must reconnatre that the buttons are not for show!
Each change this unhappy feeling great on her. In addition, three pots affect the volume! But the manual as clear, especially including an introductory dmarche effective (a kind of tutorial) and including proposed configuration, trs ais take full ownership of the machine.

Ct for my eclectic, the sound is satisfactory. I use it with my Ergodyne j'obtient easily and sounds hot or mtallique necessary. There is a sort of "growl" INTERESTED in some configuration that is probably the lack of tweeter is sometimes a problem for me elsewhere. Saturation is INTERESTED and allows (low gain) to reproduce the sound amp Fatigue

I use it for a year and a half and I am fully satisfied. I think have got my money. Now if I could extend over 200 euros the era, I may have invested in 700RBII in the same brand in order to have a tweeter and more power more ...