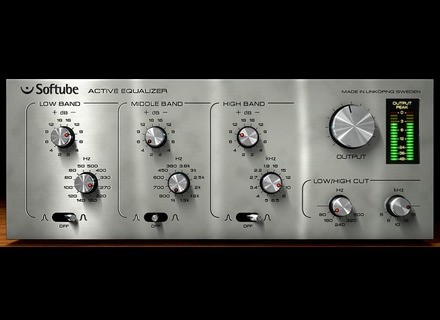 Softube Active Equalizer
4
The Softube Active Equalizer is one of three EQ plug-ins that comes in Softube's Passive-Active Pack of plug-ins. Also included is the Passive Equalizer and the Focusing Equalizer, but the Active Equalizer is probably my favorite of the bunch. Installing the plug-ins and getting the entire bundle up and running wasn't difficult at all, as it was the standard procedure of following the step by step instructions. The make up of the interface of the plug-in is really quite simple as it's a basic three band, semi parametric EQ. It's not fully parametric because you can't choose the exact frequency desired, but each band has enough fixed frequencies that your basically getting the same amount of control. Each of the three bands has separate parameters for gain and frequency, as well as a two way switch to choose either a more narrow or a wide bandwidth. Lastly, there's a high and low cut section with five fixed frequencies to choose from on each. It also has an overall output leveler. I didn't need the help of a manual for this one and I don't believe that too many users will.

I'm running the Softube Active Equalizer and the full Passive-Active Pack at home in Pro Tools LE 8 for only a short while, but I've yet to encounter any performance issues as it's been pretty stable for me within this configuration. I run it on a Mac Book Pro that has a 2.2 Ghz Intel Core 2 Duo processor and 4 GB of RAM and I run Pro Tools with a Digi 002R. I haven't had a need to run it on every track as there's a bunch of EQ plug-ins that I've got that I will use before this one, but while running three or four of them my system has been running it smoothly.

While maybe not my favorite EQ plug-in, the Softube Active Equalizer is still a very useful one. It's got a clean sound that won't color your tone beyond how you boost or cut, and has enough flexibility to get the job done more often than not. It's not the best if you want to get really specific with your frequencies, but it covers the spectrum pretty well and most of time that I'm using it I find that I can get the job done. I definitely like the Active Equalizer the best out of the three in the Passive-Active EQ bundle from Softube since I find it to be the most flexible. The bundle as a whole is worth checking out, but only as an addition to other more traditional EQ's and not as your sole source of EQ. You can't get the Active Equalizer on it's own so you'll need to check out the bundle as a whole...
Did you find this review helpful?yesno
»