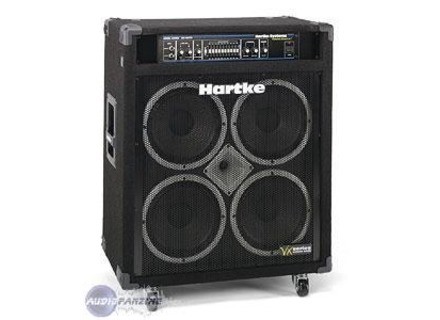 All user reviews for the Hartke VX3500

Hartke VX3500
5
After a lengthy search (internet and in person) and comparison of several makes/models, including Ashdown, Ampeg, Fender, GK, and the likes, I found this model manufactured by Hartke. I already owned and used a Hartke B-90 (which is another review in itself, as it is an extremely cost effective and effecient amp, so I was familiar with the brand and quality.
I purchased the unit at Damm Music, in Wichita, Ks. I went in and asked if they could match the price I had found on the internet ($699.99)and they said they could. So, I prefer giving my business to a home-owned store, and they were new in the town and needed the biz, so they ordered it for me. I found it to be a deal in that I didn't have to pay shipping for it (and it is one heavy dude, being about 110# or so).
I wanted a combo amp, due to the portability of one compared with the rack-mount and cabinet concept. Having owned both, I was looking for easy this time, with an amp which could render the "goods" as a combo amp.

This amp is a "combo" amp, in that it is a single unit,approximately 16"x26"x33". It has the Hartke HA 3500 series head (350 watt, effects send/return, two seperate preamps, one being a tube preamp vs. a solid state preamp, both being able to be mixed in any combination for preamplification. The power section is controlled by a master volume, so one can achieve a full tube preamp and power output, or mix them any way they choose. It offers a multitude of sounds and tones, via a 10 band graphic EQ, (lit by LEDs)which can be placed in or out of the mix,as well as a bass and a treble contour control (ie. boost or cut). It has a compressor, which is switchable (in/out) having an LED which shows when compression is occurring.
I prefer to run the tube (I believe it is a 12AX7) preamp full-on and adjust the volume with the master. Sounds like a tube amp (Ampeg) and performs like a tube amp.
One can get about any type of amplification wanted, from extremely bright, punchy tones to the "ooomph" of a 2x15 cabinet. The speakers are Hartke's 10" paper cone type. Not the aluminum drivers they are known for, and this probably helps keep the cost down, as well as giving it a bit more warmth. It has four drivers with a piezo horn mounted center off them.
At 350 watts, this baby will crank it out. It is an impressive looking amp, with most functions (EQ, compressor, etc.) being LED lit, making it extremely user-friendly for a gigging musician working on a dimly lit stage.

A footswitch would have been a nice touch, so that one could control the compressor, the graphic, and the boost/cut contours. Of course, with such a concept, one would have to rely on presets at the amp itself, but the ease with which it could be achieed would be nice.
The weight is a bummer, I must admit, but it is equpipped with good side mount recessed handles (needed, believe me!)which balance the unit for carrying pretty good. It has casters which are integral, making it much easier to move around stage or home.

The unit seems to be extemely road worthy. The fact that it is a combo (picture a 4x10 cabinet with a head mounted above it which is integral in the cab.)makes set-up and tear-down pretty easy. I will admit that it is, pretty much, a two-man/woman amp when it comes to transport. The unit is covered in black carpet, with a steel mesh grill. The speaker frames are a dull silver, as is the horn, giving it an agressive look. It looks as good as it sounds.

Having owned many amps and basses in the past, from Kustoms (circa 70's) to GK's (mid 80's), I find this amp to exceed the requirements for most bass players. It would be strong enough for stage in mid-size venues, and more than adequate in clubs and bars.
Bang-for-buck, you can't beat it. It has features and tones which are comparable to much higher priced amps and cabs. Given the fact that it is a combo amp, making transport much easier for the working bass player, it is a great value.
You like it loud, this baby can provide it. You want flexibility and portability, as well as great sound, it can provide it. For the cost, I feel it truly cannot be beat.


This review was originally published on http://www.musicgearreview.com
Did you find this review helpful?yesno

Hartke VX3500
5
This is a bass combo mixed lamp / transistor.
The preamp section is mixed, with the possibility of combining the two floors, is the power output transistor. The amp delivers 350Watts, which is ample for many rooms.

The preamp section offers two gain settings, has a lamp, a transistor, the two are used simultaneously.

Next is a compressor which is set via a single knob.
The most interesting part of the amp is a 10 band equalizer.
A section outline, an EQ simplest way to quickly adjust the bass and treble at 100Hz to 10K (yes it had its effect on low).

The connection is made by jack at the front, with separate entrance Active and passive.

to the rear is an XLR DI output on a console to send to, an effects loop in jack.
And of course the HP port to disconnect the HP integrated.

Level speakers, we have 4 classic Boomers cardboard (not aluminum), and a titanium tweeter.

You plug, you ride a knob of the master and preamp, and it's good!

The manual is not important, but it is quite full.

Basic sound Hartke is obtained. Accurate enough, rather metal (but less than the body with aluminum cone) but also very flexible.

Depending on whether one uses rather the preamp tube or transistor, we get a thicker sound a stink with the lamp (over medium Netherlands) or more neutral with the transistor. Personally I put the lamp Midi preamp and preamp transistor 9H and I like the rendering.

With the compressor can cut corners, as for a game that very irregular with a pick to get a good sustain on fingerstyle. The LED is not accurate to say the action of the compressor, it is only necessary to rely on the ears.

The ten-band equalizer is the best section of this amp, with well-chosen frequencies that can really shape the sound. Then simply complete the EQ contour, and we get what we want.

I play a lot of styles, and this amp fits easily.
It is in top form on the nervous rock, punk, stoner, etc. ...
To dub / funk it may miss some real low and being too specific in the mid / high.

I use it mainly with a Rickenbacker 4003 and an overdrive pedal Mojo.
This set works well and gives a very low present and alive.

I use it for several years, I've always loved the sound Hartke but with this amp you get the best price for a more than adequate.

I remake that choice without hesitation, my bass too.

I have tried many other bass amp models, but I never get the sound I want. Or spending a lot of time on set.

Its only flaw is its DI output, a few feeble and strangely does not provide a easy to mix or add sound. A good external DI is a better choice.

Hartke VX3500
5
Transistor amplifier
prampli with a lamp and then transistor
rglage of pramp: choice of the gain of the lamp and the gain of the transistor
bass and treble court trs effective qualiseur Figure 10 band switchable
compressor
XLR output
effects loop with SETTING THE send / return
hp 4 * 10 "
Roulette (very practical given the weight of the beast about 40kg)
between active and passive
350w in 4ohm 240w into 8 ohms (since there is only one speaker here is the 240w)

Trs simple it grows well on a lamp pramp a little that of the transistor with a compression hair (just to say to make because I do not really see the diffrence with and without) on APRS rule and finally the contour qualiseur graph. the good should not be spending a little more time (5 a10mn if it is not often double sound) for rglage really perfect. Besides, qualiseur is very practical for the 5-string bass (I use) as far down 33Hz so well can boost bass notes trs

Really nothing to say that the TRS is Hartke's good! of course I prfr svt3 a pro with an Ampeg 8 * 10 ca t aur better but 750 euros is really unbelievable how much has it cost the good speaker is very s also can be good in some time I would add it a 1 * 15 "for more power and good bass but not really necessary c the amp itself sounds good by itself is APRS prciser I use a 5 string active bass with a good prampli trs (btb505 ibanez) but still it sounds really good trs

)
power is sufficient to always find a rpeter work together in small rooms
I would do recess this choice the only regret it is impossible to do so if I saturate more than twice as namely that g bah I will pay a genre that saturates an ampeg svt kk or something like that but the good is not playing in the same court
Did you find this review helpful?yesno
Cookies help us improve performance, enhance user experience and deliver our services. By using our services, you agree to our use of cookies. Find out more.