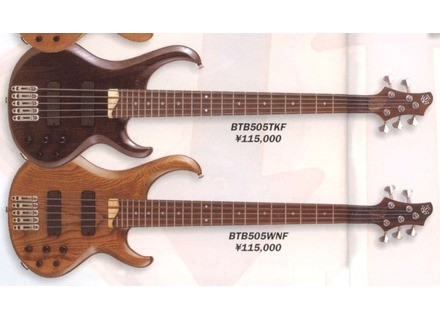 BTB505, 5+ string bass guitar from Ibanez in the BTB series.

Ibanez BTB505
4
I do not know what country it is manufactured
24 frets 2 active pickups, active preamp uses 2 x 9 volt
A volume balance between a micro 1bass a treble a parametric medium (with selection of a frequency boost or attenuate)
very comfortable handle any problem from 4 to 5 strings

The neck is just perfect I can slapper on the string of stifling the middle and if the thumb of my left hand without any problem
access to acute box is easily even if it is not the most important for a bass.
I love the shape of happiness is really my girlfriend is jealous! and is light enough.
the sound is fairly simple to find and it is not bad at all.

It is suitable for almost any style rock metal funk soul ...
I play with more purpose with a big muff, a synthesizer, a compressor Jacques, and a digitech distortion from home.
Record new to the amp I play on a Hartke VX3500 and also from time to time on a fender rumble100

caramba95's review (This content has been automatically translated from French)

Ibanez BTB505
5
Made in Asia, certainly ...
24 frets, 5 strings, pickups Ibanez
Independent bridge for each string. I admit I found the design very beautiful and it has proved robust in practice settings.
The strings are original elixir. After testing with others, I came back without hesitation on this choice: the more neutral term and the beginning of the use of ropes.
1 volume knob, 1 micro scale, 3-band equalizer with parametric medium.
Handle varnished rather flat. 2 adjusting screws.

The neck is quite pleasant, although a bit wide for smaller hands. Access to acute

is easy. I fell for its looks (mine is black). Only downside: a bit heavy!
On his "base" is not typed but the palette appears when you start playing with the equalizer and the balance between the pickups. The medium with its "boost" parameter requires a lot of agility for a proper setting. Personally, I found my sound, and I no longer play on micro balance front / rear to move from a clicking sound to a more mellow tone.

I play more rock style. It sounds good, though with regret that it does not define as clearly as I would like the group. But here I am a perfectionist, in view of value for money of the beast.
Average for the slap to my taste ... Good thing I'm not a fan.
I play on Hartke, Fender and Laney. The marriage with the Hartke is not bad: clean attack and medium flattering.
I use a compressor pedal zoom in B2.1U (light) and the chorus on a solo, but I'm not a fan of effects.
The possibilities for its nothing with the bass are very large, but rather rock oriented, I think. It lacks a side "singing" in the highs.

I use it for a little over 6 years. Only the volume knob dumped me, but I think because of the transport bag. But no worries for replacement.
What I like most is its versatility and design. Least, it would be a weakness for his chorus and more jazz.
I put it in competition at the time of purchase with a Yamaha and Cort in the same price range: there's no picture taken!
The value for money is really good: I still search for new combinations to sounds, and am not at my surprise!
With the same budget, I would do without hesitation that choice.