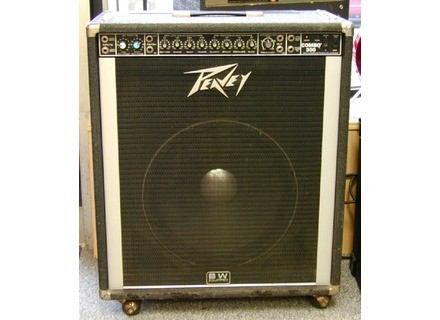 lesebseb's review (This content has been automatically translated from French)

Prs used for 10 years for rock with a peavey passive
the sound is rather flat, deep but cold enough. Acute means

The +: 300watts for cheap. Bass Submitted
the -: bulky, weighs a dead donkey, its cold

I ended up selling it to buy an Ashdown Electric Blue 180 watt much lighter and better quality. But he rendered great service, especially for the non-transplanted with a live drummer who types.

Manual: long lost, but useless I think.
This gives the sound that agrees with qualiseur 8 bands, which allows for rglages enough.

One BMOL: 40 pounds even when the PPRE.
APRS purchase towards the DIY store to include four wheels.

With this amp I jou rock, jazz fusion, currently of Celtic.
In fact it is an affordable 300 watts which is suitable for all styles.
It is better to use the boost (by pulling the buttons lgrement gain) for better dynamics.
The qualo is really useful, it's not a gimmick, it provides the versatility of this hardware.

I use it for 18 years, he has never moved. 20/20 for reliability!
I had bought 6000 francs in 1989 Obviously prices have not see anything today.
Qualitprix Report: the era probably expensive, but at the price argus today there is no hsiter.

I will not go that choice because my needs have volumes with the ge ... yeah ... less muscle, a percussionist and a scratch nags too, can afford to buy a sound system ...

But this amp on rpter IDAL.

BenJthebassiste's review (This content has been automatically translated from French)

Peavey Combo 300
4
Say before I change one thing

Personally it was about 6 months I'm playing on this amp, I should be satisfied in part just to do for me, a huge minus is the case to say is its weight, it was officially 20 pounds, but probably a good bit more, you have no control on this amp grip is useless, when you buy buy small wheel, or a devil to be able to carry

I play Metal, Rock, and I find the height I have an Ibanez Blazer series of Original 80's, I think my bass sounds a bit flat, but thanks to him I get to give it a second youth perfect for my taste drummer has come to hear me no problem, that's all I ask.
when it's actually it is not perfect it blows a little may be due to the age of the amp but hey he spits all I ask, you can have any kind of thanks to the great equalizer.

In short, it's a great amp that worth the blow from its price, quality peavey, the power of sound, just the weight that hinders its use.

Personally I do not regret but I know if I redeem provided, based on the weight

Peavey Combo 300 manuals and other files