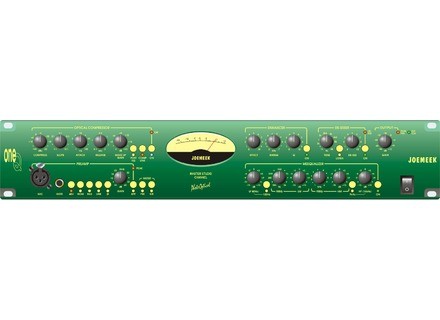 ousteprod's review (This content has been automatically translated from French)

Request a grip to compress Manir flexible, and avoid loading the inputs. (Sensitive, the machine pops ... you call in the right way ...)
Manuel succinct, but nothing beats practice.
The saw-nitre nice if it is not usable rev ... A SERIES of LED, with peak memory of t would be more useful. Qd is even a tool, this machine ...

Good quality transparent converters.
Equalo effective.
Used with an AT4033, and TLM103. (For a sn58 curiosities)
Enhancer useful, does its job ...

I use it for two months in the studio to take piano and voice.
Good prampli, prcis.
Request a grip for use Manir effective, but it is the lot of any device ....
Quality-price ratio just fine.
Did you find this review helpful?yesno
»

Color a little put off, but you feel immediately comfortable at the finish. The quality seems good and turn your Premire rvles have any malfunction of the machine and a good rev Resistors amricains to roadies.

[8] Matos plutt reassuring and complete. It lacks the lamps.

This device has everything that a musician wants a pramp professional. We work all the ear and rglages have their impact. It is easy to get a good sound, it is also easy to amliorer and we are looking for a last stronghold for this unit. The range of aids for sculpting the sound for the price gniale.

Here I can just get all of this gear as I do not want a heat draisonnable. But even in this case, I am able to bypass the pramp and insrer pramp a lamp before the impact. THE MONSTROUS guy.

The sound of pramp is good without being spectacular, it pushes and supports sound, giving it a beautiful grain and a dynamic sle nothing but lends itself perfectly to the registers in which I ' operates. The compressor is of the ball and can sing without trashing his voice better prsence least, trs fine grain when it gets under way. I use the enhancer and de-esser to Manir contained more because I do not Whereas their work as fundamentally rewarding, but for some work with various instruments, their prsence indniablement is comfortable.

[8] He did miss a surplus heat to be the ultimate machine. But it is far from a bad prampli transistors.

Complment of 10/09/2007: APRS APRS multiple testing and the trick to having rgl onions. I must admit that the ct cold and burning fat is only one among many. In fact, it can also provide sounds round and warm. But you have to go get his time normment rglages. In terms gnral I not also an enrichment of the sound spectrum and an increase in the precision of restitution. Of any good, I change my rating (9)

I use it for some months now. His characters complete their grain and not making head ct make my alli all rotate abroad. This is my first preamp staff, but I tried before acqurir several competitors, some lamps, without, however, find my Bonnheure.

[10] I can only advise. Without breaking the bank, you will have an enjoyable sound with a grain a bit for sle record typs modern trs endorsement in its quality. In addition, he is alone in its class to offer a solution if prices complte.

Chris Martins's review (This content has been automatically translated from French)

A manual "Ethiopia" and nothing is really explained in terms of sample rglages, nanmoins corresctement Describes the machine and functions DIFFERENT floors. At the same time, it's not a space shuttle and quickly found its brands (I also TwinQ a dj so I know the philosophy of the brand). The preamp is clean trs without the "iron" and much more engaged with color. The EQ is very effective and trs least 40 dBs paste it on rglages remains clean. The big piece is the compressor. It is trsdlicat rgler and sends the wood trs violently RULES ds that the attack a little short and the ratio lev. So for soft sources (acoustic guitar, vocals fminines, classical instruments like a violin for example), let the attack tab (100ms) and the ratio to 2:1 or 3:1, and compresses without ca violence, instead of a kick, if vou s want to emphasize, just a short attque 5:1 and you kick it goes through walls. Like its big ERRF stro, he excels in direct box for bass, and is comfortable on almost everything you could pass him with a beautiful vintage color; If you are looking for something super-transparent and modern, it's not exactly his calling, but he knows to stay fairly quiet on rglages "LGERS"

In terms of pure sound quality, it is excellent btement and has no competitor in its price range. You must type in the channel strip at least 500 more expensive to find something that is a bit suprieur. But I say suprieur quad, not on quality but on dtails SPECIFICATIONS. For example, a LA610 will be slightly above that of the lamps and a compressor more "forgiving" a bit more scale in some applications, but if someone asks me how I feel the diffrence Overall, I would say 5%, and the 5% cost close to 900. So what is the best Q / P? OneQ clear (well I admit I broke down and I also took a LA610mKII, complte the review comes in the week). The thing to keep in mind is that this band if silent made in Europe, would cost at least 400 more.

I've had today, but I use his great ERRF dj for some time and if I resign on OneQ, because the few with the TwinQ Difference (mono , 4-band EQ instead of 3, DESS, enhancer, XLR faade), justify their acquisition, and the sound quality of the machine is absolutely excellent. No chance that my Joemeek go or whether they remain in my rack and are my "go to preamps."

mister o's review (This content has been automatically translated from French)" Good value but not more."

Nothing to say, it's a child's play.

This is where it will be a gate anyway.
I give my opinion after reading it in one of Shredchris:
"LA610 will be slightly above that of the lamps and a compressor more" forgiving "a bit more scale in some applications, but if someone asks me how much I think the overall difference, I would say 5 % and the 5% cost close to € 900 "
And sorry for him, but I strongly disagree!
The LA610 is not playing in the same court, and we are well beyond the 5% difference.
The preamp is relatively neutral, PDO has a mounting base, nothing very original, right is the Burr Brown, but it is lion of 610 in quality.
As for the rest, the EQ does the job, but nothing fantastic either.
The comp and pretty well to color a guitar, but the rest is not great.
When the de-esser and enhancer, we still did better.

I used two years I had a lot of channel strip in the hands.
I really like the line input for retrieving the second channel of the SPDIF, I find it really well thought out.
Otherwise the rest is a good quality / price ratio, especially used, but it's still far from a chinoiserie AU in quality and rendering, do not dream.
I would do is peut'être choices in the same case, namely for a client who is not a big budjet for his studio preamp. But not personally. I prefer a TwinQ, same preamp, eq and even the same comp, but in stereo, and mix the guitar, but not for the catch.

Did you find this review helpful?yesno
»
Read the 5 user reviews on the Joemeek OneQ »