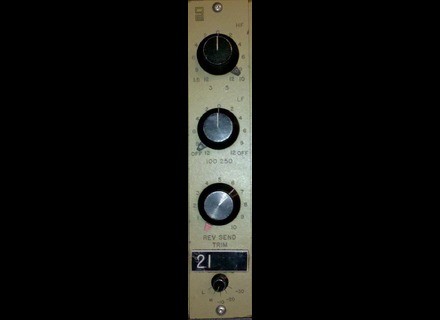 Quad Eight Console Module
5
This review is for a Quad Eight module from a full console, normally not available as it’s own channel strip. We’ve got a bunch of these at the studio where I work, although I’m not sure the exact model of the console that these came from. In order to use these Quad Eight modules, you’ll have to rack them in a custom casing, as they don’t fit in any regular sort of rack system and need their own power supply and connections. Vintage King made the casing that I’ve used them in. Depending on how you case them and wire them, there can be some quirky things with these modules…

Using the Quad Eight Console Modules isn’t too difficult, as it’s got a simple make up for a channel strip. The modules each have both a high and low band EQ, as well as a dual tiered trim knob. That’s everything there is in terms of parameters for these modules, which seems to be a similar make up to many of the different Quad Eight consoles. A manual definitely wasn’t made for these individual modules since they never were available in any retail store, but you might be able to find a manual for the console itself.

The overall sound quality of these Quad Eight modules is superb. They’re great for a variety of applications, as they kind of have a Neve type of sound to them. The ones that I’ve used are unbalanced, so the signal comes in pretty low depending on what you’re recording. We’ve got eight of these in one of our smaller studios, so I’ve used them for a variety of small applications, as well for recording a full drum set with all eight of them. I’d definitely consider them multi-purpose mic preamplifiers, as they sound great across the board for what I’ve used them for. I haven’t used the two band equalizer too much, but even though it doesn’t have much control, for what it can do it does have a very clean sound.

I can’t really say that I’d recommend getting some of these Quad Eight modules, as they’re pretty rare for sure, but if you ever get to use a Quad Eight console in general I think you’ll be pleased with the way it sounds. I wish that I knew the exact model that these modules came from, but either way they sound fantastic. I can’t say that I’d encourage you to seek these out, as I really don’t think you’d be able to find them, but if you do, they’re most definitely modules worth using.
Did you find this review helpful?yesno
»