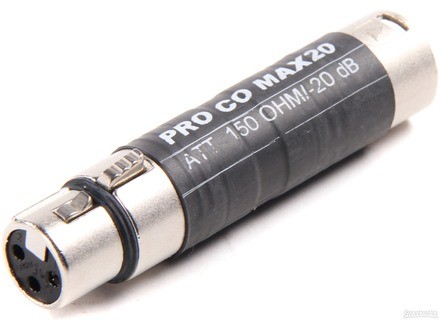 ProCo Sound MAX20
5
The ProCo Sound MAX20 is a -20 db pad that you insert in between your mic cable and microphone to give you some more head room and -20 of attenuation with hot mics and on loud signals. There isn't really anything that you need to know other than that as it will simply give you -20 db of attenuation. There is also both a -10 db and -30 db version of this pad, each of which varies in price but this one if the most expensive since it's right in the middle and is kind of the perfect amount of attenuation you'd need if you were using one of these. A studio that I recently started doing some work at has one of these on hand for situations where there might be a loud source and we're using a sensitive mic. It definitely comes in handy more times than you would think and is something that every studio should have one or two of. Of course many microphone preamps have a built in pad, as do many microphones, but there are plenty out there of both that have neither of these, so it's always good to be prepared for whatever, especially if you're working in a professional or semi-professional environment. I can't say that the price of the ProCo MAX20 is too unreasonable, but it does seem like there are other pads out there that could be a bit cheaper than this one. Still, it's not all that much more and it's probably in the end worth it as it seems to be a pad that is built to last and can be your studio mainstay for however long you might have it. I'd scope out pads made by Shure and others but you can't really go wrong here with the Proco Sound MAX20.
Did you find this review helpful?yesno
»