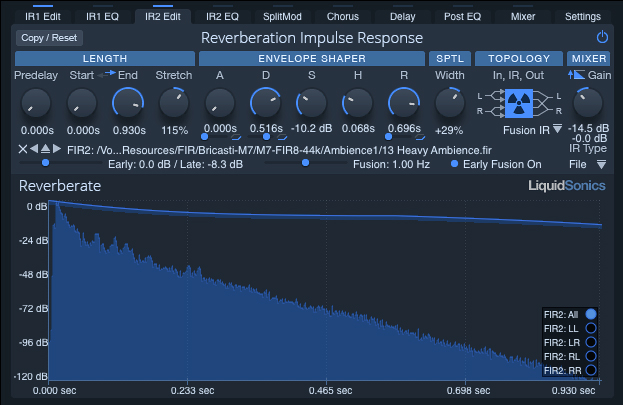 Product replaced by the LiquidSonics Reverberate 3.

There are two clearly distinguishable schools in the software reverb world: algorithm and convolution.

New AFfiliate
2 Posted on 02/21/2016 at 04:43:08
The problem with this reverb and many others, is that the reverb effects as demonstrated here... sound glued on. I hope to post a detailed solution to this problem on my YouTube channel in the coming months. Will let you know about it.
Cheers
0

New AFfiliate
4 Posted on 02/22/2016 at 12:31:00
Yes Mike, its what old engineers like myself refer to as the "Glued On" effect. The issue with reverb plugins is their inability to place a vocal or instrument in a reverb environment, without having to add extra wet to the reverb sound to make it sit in the mix. Regrettably the more wet you add, the more the singer is moved away from the foreground, whilst using less wet, creates an unnatural buffer zone between the vocalist and the reverb tail, thus the expression "glued on" effect.

Unfortunately modern vocal mixing is overdosing with the problem, as there is no natural reverb reference point going from foreground to background, because the "Glued On" effect is disrupting the reverb tail. A good reverb design should be able to create the illusion of space, whether the subject matter is placed in the foreground or otherwise, without having to suffer from disruptive artefacts as mentioned above.

If you listen to the late Larry Levine's engineering work on the Righteous Bros, and Tina Turner records etc., you can hear there is absolutely No "glued on" effect on the vocals, because he had a perfect understanding on how to blend reverb with everything else. In other words the less calculating the brain has to do with your mixes, the more it can get hooked on your music. So now you know how to sell millions of records just like Larry

AFicionado
5 Posted on 02/25/2016 at 11:44:06
Do you find this problem with all reverb plug-ins, or are some types better than others: For example, do you notice a difference between convolution and algorithmic reverb plug-ins in this respect?
0

GARRARD401 REPLY:
Thankfully there are a couple of reverb plugins available, particularly some of the UAD reverb plugs that seem generally free of the “Glued On” effect. For example I take my hat off to Universal Audio for nailing it in plugin form one of the best reverbs for vocals, and guitars, namely the AKG 20 Spring Reverb. In addition the new Waves Abbey Road Reverb Plates plugin also seems to be glue free. [if you have a hardware reverb, then you shouldn't hear any glue, since this appears to be a plugin design anomaly]?

MIKE'S QUESTION NO 2: For example, do you notice a difference between convolution and algorithmic reverb plug-ins in this respect?

GARRARD401 REPLY:
Anyone who knows me would be aware that I am not too enamoured with convolution reverb, as it can be very static. Nevertheless I think Overloud's ReMatrix convolver reverb is a step in the right direction so as to improve the motion of these types reverbs, which I find very encouraging.

P.S. In order to address question No 2, I had prepared two audio examples of both of Glued and Non-Glued using Convolution Reverb for you to compare with, but alas there doesn't seem to be an option in uploading to your server unless I am missing something?

In order to address question No 2, I had prepared two audio examples of both of Glued and Non-Glued using Convolution Reverb for you to compare with, but alas there doesn't seem to be an option in uploading to your server unless I am missing something?


You can upload MP3 files. If you look at the top of the page under the Media tab, you'll see an Add an Audio File option.
0

P.S. In order to address question No 2, I had prepared two audio examples of both of Glued and Non-Glued using Convolution Reverb for you to compare with, but alas there doesn't seem to be an option in uploading to your server unless I am missing something?

Here's the media tab Mike's referring to where you can click on Add an Audio File.

Looking forward to hearing your audio examples! Let us know if you have any issues uploading them.

New AFfiliate
9 Posted on 03/17/2016 at 06:15:01
REVERB DEMONSTRATION: GLUED v. NON GLUED
For the purpose of this demonstration, I have enclosed two short royalty-free audio files courtesy of MusicRadar.Com so that you can compare the “glued on” effect with the unglued version. MEMO: Please use good quality headphones to hear the differences.

Glued Version: https://en.audiofanzine.com/medias/audio/a.play,m.478070.html
I used a standard approach like many other engineers when applying a plugin reverb to a vocal track. Pay particular attention to the words "Stars" and “Sky”, where you can clearly hear in this glued-on version, a blurring effect that detaches the Vocalist from the reverb tail. When listening to it you might be tempted to add more Eq to brighten it up, but it still makes no difference as the glue artefact remains the same. Secondly its very difficult to connect with the emotion of a singer such is the distraction that the glued-on effect has on the vocal performance.

Non-Glued Version: https://en.audiofanzine.com/medias/audio/a.play,m.478071.html
In the non-glued* audio sample, and with the female vocalist to the forefront, you can definitely hear the singer is fully embedded with the reverb tail, as you would expect in a real world situation like a church or hall for example. More importantly with the glued-on artefact removed, the potential to sense the emotion of a singer cannot be underlined enough in a full production setup.

*Erratum: In the heat of the moment after uploading the non-glued audio demonstration, it states "Standard Reverb Setup, this is incorrect as I used a reverb template to help eliminate the glue effect. So I am extremely sorry over this mix-up but hopefully you can hear the difference?

RE UAD 140 PLATE:
Mike, your interest in the UAD 140 Plate comes as no surprise, as one of the reasons why many engineers become addicted to Plate and Spring Reverb is that both hardware systems have a backbone to the reverb tail, whereas many reverb plugins seem to struggle trying to replicate it? Perhaps going forward this is one area that plugin programmers might have look at so as to make vocalists, and instruments stand out more in a spatial context?

Technical Detail:
The Reverb used in both demos was QL Spaces convolution reverb plugin. To create the non-glued verson, I used an old reverb template that I have been working on and off for the last few years, that needs further refinement. That said, as a stop-gap the template does help eliminate plugins that suffer from the "glued on" fate. When I am satisified with the final version of it I will post it on YouTube. The term "standard approach" means a singular reverb plugin was used to treat the vocal track.

CREDITS:
Singer: Mandy Edge (Mandy is an excellent singer as you will hear in the free sample pack link below).
Samples Courtesy of MusicRadar.Com
Royalty Free Link: https://www.musicradar.com/news/tech/sampleradar-275492

Cheers
Dave (Aka Garrard401)
P.S. Apologies to LiquidSonics in getting side-tracked on plugin reverb artefacts, when I should have focused on their plugin only. Hopefully they will take on board what has been discussed so far?
0