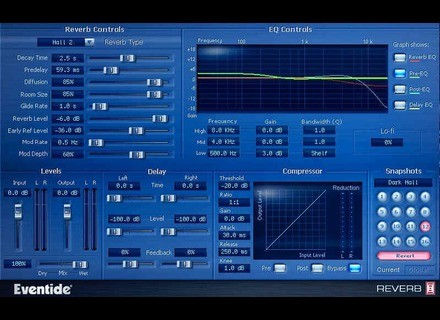 More than Just Another Reverb Eventide’s UltraReverb is an algorithmic reverb plug-in that offers impressive sound quality, sonic control and flexibility, making it a potent contender in the reverb plug-in wars. Not only does it feature reverb, but also a built-in compressor (mainly for compressing the reverb signal) and stereo delay line. As a result, it’s useful both for bread-and-butter reverb applications like vocals, snare drums and acoustic instruments, as well as for electronic and sound-design applications. Read more…

Eventide Reverb Plug-in
5
The Eventide Reverb Plug-in is one that comes as part of the Anthology II bundle, as well as on it's own I believe. It takes a lot of it's sounds from the H8000 hardware processor from years ago. I don't have this plug-in myself but have used it a good deal at the studio where I work, where we've got the full Anthology II bundle. I wasn't involved with the installation of it either since the studio has had it since before I worked there. Learning to use the plug-in on the other hand isn't too difficult, although there's a lot going on that users need to be aware of. It's more than just a reverb really, as there are a few different processors at work here. It's got sections for reverb control, an equalizer, a compressor, a delay, and for setting your overall levels. The reverb section has a ton of sliders to control your sound, and you can also save 'snapshots' of your sounds. The manual might be helpful but I haven't checked it out myself.

The studio I work at has the Eventide Reverb Plug-in on all of our systems, all of which are Pro Tools HD based. For this reason I very seldom have any issues at all with these systems and we're able to run everything very smoothly. This plug-in does seem to take up more than your average plug-in, and for this reason it's a good idea to use it on an auxiliary channel and bus what you want to it. I do this with all reverbs to save processing power and it's especially important to do so on an LE system. Either way, if you're able to run plug-in comfortably on your system now, you should be able to handle this one as well.

The Eventide Reverb Plug-in is one of the most unique reverb plug-ins out there as it's more than a reverb, also consisting of delay, equalization, and compression. It's great for situations of all types as it's fairly easy to use and has a wide range in terms of what it can do. The reverb itself perhaps isn't my favorite of any that I've used inside the box, as I do prefer TL Space as well as Altiverb since they are more geared toward traditional types of reverb, the Eventide Reveb Plug-in still has great sounding reverb and it's really the extra processors that propel it into being something more complete. I don't know what it costs as an individual, but within the Anthology II bundle it's absolutely worth considering for professional DAW users.
Did you find this review helpful?yesno
»