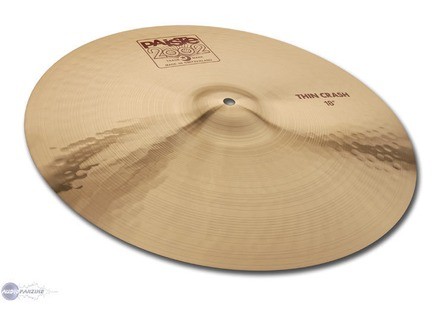 Paiste 2002 Crash 16"
4
The Paiste 2002 16" crash is an excellent cymbal for rock music.  I think that the crashes in this line are the highlight and are a great deal for their quality.  A few steps down from the signatures, the 2002's still provide professional quality at a more reasonable price.  I wouldn't bring these to a jazz gig, but for rock I would almost prefer these 2002's to the Signatures because of their sound and durability.

Ths 16" crash embodies the typical 2002 characteristics.  It is very responsive and bright, exploding with sound at the slightest stroke.  While it is bright, it doesn't have an overly pingy sound and has a vintage feel.  The coating really adds to this, as it is not very shiny.  For mostly lathed cymbals these have a lot of character.  The 2002's have a nice mix of dry and wet qualities and are well balanced overall.

One of the biggest benefits to playing 2002's is that they are very durable.  More so than almost all other lines I have played, these can take a beating.  I usualy never damage cymbals through playing, but I  have heard from multiple drummers that these 2002's are among the strongest out there.  This is important especially when considering the genre of music these are best suited towards.  Zildjian A's for example are excellent but I have seen many of these break.  I have never seen a 2002 break.

The only complaints one could make about these is their lack of versatility.  Like I said, I usually would only take these to a rock or funk gig.  They are a little too bright for my taste otherwise.  Also, they look very different from most other cymbals so they might throw off the look of a mixed setup.  Of course, this is a minor consideration.  I like the 2002's a lot, but especially the 17" and 16" crashes.  I would suggest these if one is looking for a reliable, durable and vintage rock sound.