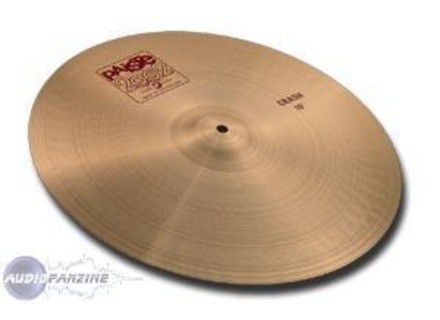 Paiste 2002 Crash 20"
3
Like the other cymbals in the 2002 line, this is good for rock music.  The 20" crash has truly amazing power.  The 2002's already pack a punch, so supplying 20 inches is almost out of control.  This is actually the only 2002 (reviewed) I have never include in my set at one time.  I have played it multiple times however, and would loved to own one.  Like most large crashes, this can be doubled as a crash ride.  It can even be struck with the shoulder of the stick to get a trashy china like sound.  This is the benefit of large crashes so many sound can be obtained.  Not a lot of drummers would immediately desire such a large cymbal.  After some experimentation, it is very difficult to resist.

This cymbal is bright and powerful.  Its bell is killer, definitely a few steps above the bells from crashes of smaller sizes.  It has a very long sustain and a fast attack.  It can be used as a ride, but the ping sometimes gets lost in the wash.  It is very pleasant to ride on, creating a wall of cymbal crashing.  This is great for filling up space, though I wouldn't use this for brief accents.  Because if its size, it happens to be a decent amount deeper than its smaller relatives as well.  Its large size is slightly cumbersome, depending in the setup of the other cymbals.

Like most 2002's it is very durable and this can be felt during the first time it is played.  It retains the vintage 2002 sound while offering precision and consistency of modern lathed cymbals.  I would recommend this to someone who is interested in large cymbals and 2002's in general.  However, it is a cymbal that some would consider unnecessary.  It lacks a certain versatility, in part due to the line but also due to its size.  For this reason, it gets some points deducted.  At such a large size, it is also more expensive than most crashes.  For this reason, I never picked one up myself.

Ludo Slide's review (This content has been automatically translated from French)

Paiste 2002 Crash 20"
5
I have long used a game of this SERIES Paiste 2002 crash of a container 18, a 19, a pair of 15 inch hi-hat and ride a custom 24-inch specially USD. The 20-inch Crash marries well with all. With much more depth and power to 20 inches.
Alloy 2002 is the 70's rock 'par excellence, the whole SERIES is fabulous. Many drummers still use today (Fred "Burns" in the Pleymo possde one I think).
For better homognit I think it is necessary, use this cymbal with other SERIES from the same (if the budget allows, though the ... Ah sr in!)
Also, we must admit that when it is fully expressed cymable typing, not pretending, what! It would not be appropriate in all game situations proscire A workplace acoustics. on the other hand, to pass through the wall of guitar and bass amps, it has not invented anything better.
Its reputable prcde the ... It's a great cymbal, a great value!
Did you find this review helpful?yesno
»