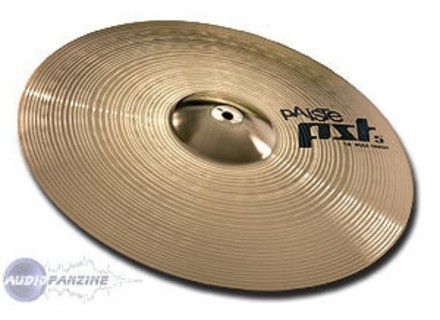 benoat's review (This content has been automatically translated from French)

Paiste PST 5 Rock Crash 16"
5
Use of the cymbals for 6 months.
The range is PST5 I think the best range of cymbals that exists in this price range, unfortunately, little known (I have rarely seen in stores). Controls on the net is still lower the price, you get a 100 euro average for Charles, or a crash, which is nothing compared to the quality of the cymbal sound and robust
Report quality standard price for my part, what is more solid.
I tried quite a model, cheap sabian, zildjian, but in this price range paiste excels.

Kefen's review (This content has been automatically translated from French)

Paiste PST 5 Rock Crash 16"
5
I use it since December 2005 (with a medium crash 18 ", a charley medium14" and a ride rock20 "all PST5) First report quality price is unbeatable! Then choose rock / medium / thin allows a large variety of sounds that will please everybody. (all cost the diffrence between DIFFERENT MODEL in store). Then the sound quality is top, the cymbals of the same MODEL (charley ride crash ...) all sound perfectly. The Tone of the crash is rather in the medium, not too explosive, rather large (but not heavy!) I have no ide of life but for now all is well.
I am perfectly satisfied with this crash, o my bill.