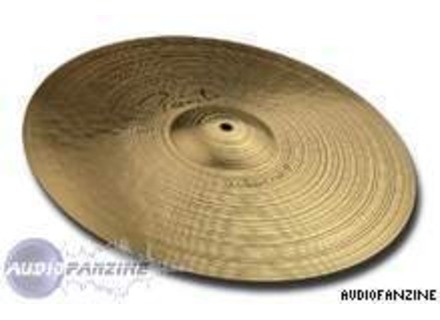 battsrad81's review (This content has been automatically translated from French)

Paiste Signature Mellow Crash 18''
5
I use this cymbal for over 3 years. It is just fantastic (like 5 different pocède I in this series). "MELLOW" is really the therm that this cymbal set: smooth, soft, rich and profond.Pour I play my part in all circumstances: mallets bell roll, slice or full impact, etc ... and responds to each of my solicitations. Be careful though, I wear a lot of attention to the agreement of my cymbals and it is fully integrated with my set and my game, perhaps in circumstances différant it does not marry this with the first round of the corrugated tolle walk. N'ésitez not listen to it on the "sounding cymbal-room" PAISTE site. In over 15 years I have tried a lot of cymbals of all makes and all ranges and I put it on immediately (with a full set signature PAISTE). The price, it's expensive, even very expensive .. . But not too expensive, (288 Euros nine-delivered to the net) price of quality may ... In conclusion I would do the same choice, besides me to have them and I keep ...
Did you find this review helpful?yesno
»

rw's review (This content has been automatically translated from French)

Paiste Signature Mellow Crash 18''
5
Cymbal very interesting.
The adjective that comes back to me and this crash would be: Sun.
It has a medium-fast response rather serious in its head with harmonic brilliance Paiste in endnote, well filled in the attack, but not as much as power crash (too loaded to my humble taste). It's a crash subtle, fine I would call "lucid" in his speech. It is just as biting as his friends crashing in the Signature line relatively quickly extinguished. I'm not entirely sure of the main advisor crash (it depends on the games of course), but question and answer with another crash wider & wider they should have both very striking conversations. The volume is balanced delicately lighter than a crash without being part of Thin models. It's a crash crash more serious than a full and fuller than a Fast Crash (with respect Signature Series) and also more mellow than a crashing Power.
His character does not deliver fully in the attack, but rather just after the decay. That's why I call her profile solar, because if you play with mallets will load quickly rather its medium-grave will end up on harmonics radiate the brightest light and never falter in his name (= mellow ripe) . Subjectively speaking it reminds me of the song "Set The Controls For The Heart Of The Sun" for Floyd ... to each his correspondence. I do not know if this will really help

Heart Of The Sun
Did you find this review helpful?yesno
»