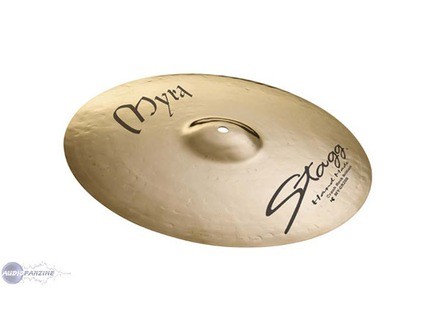 MY-CR18B, Crash Cymbal from Stagg in the Myra series.

All user reviews for the Stagg MY-CR18B

Average Score:3.0(3/5 based on 1 review)
Value For Money : Excellent
Not satisfied with those reviews?
Our members also liked:

Tina Arkos's review (This content has been automatically translated from French)

Stagg MY-CR18B
3
I just had a crash Paiste Alpha 14 in my set, no other crash, no wrinkle Because out off tune! So I took a Myra Brilliant Rock Crash 18 for 108 euros including shipping to baguetterie. This is the new production made by rolling.
Unpacking, she has a beautiful face but finishing including polishing leaves a bit to be desired (we see a lot of micro scratches) but hey it's not manufactured in Switzerland in the 2002 series of Paiste! Otherwise the cymbal is not too thick and therefore distrust for big hitters!
Once on foot, it gives its full potential! In a crash, a good old bombtrack of RATM, bah forget you quickly Paiste 14 (but good considering the size it normally is not too hairy for rock cut the 14)! She sends many cat burglar! The projection is immediate with a nice explosion and then a gentle descent with a good performance of harmonics.
Ride in it also the case but careful not too oats under penalty of scrambling a bit to listen (to paraphrase John Le Guin humorist very fond of spoonerisms chopped fine). The ability to use it well makes me ride service until they can make a real ride like farting Dark Energy Ride Mark II (but there must be the CODEVI PT).
The bell can be, depending on the strike zone and attack the stick rather different sounds and rock enough for my taste.
In conclusion, I find the value for money good enough, but I tried very few other cymbals (except on the net) of the same type and for information I was quite tempted by a Paiste 2002 but there means 250 must be let go!
If not for those who want to hear, because the site it's not possible, Stagg, I found on YouTube http://youtube.com/watch?v=7PnXV-d5Ccw&feature=related
Very happy at least for the moment.

Hello after several months of use, but still not broken in listening again to the good old Led Zep and other RHCP, it must still agree that we are only for his money in terms of tone and that is pretty remote Trademark Prestigious! So for those who have the patience to save is better to type in the reference cymbals, Paiste 2002 and so as Audiard said: "The price is forgotten, the quality remains.". For others (forward), the price / quality ratio is good and everything I said before still holds true! The sound is unique, I strongly suggest listening before buying.

Favorite drummers: Chad Smith, John Bonham, Dave Weckl, Steve Gadd, Manu Katche
Did you find this review helpful?yesno
Cookies help us improve performance, enhance user experience and deliver our services. By using our services, you agree to our use of cookies. Find out more.