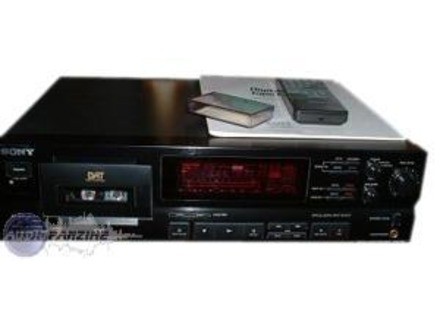 - What thing do you like most/least about it?
Ben is a TAG "salon", so nothing special in terms of features and connections, except that the right to RCA analog but also with in / out and a single optical input coaxial, but the more regrettable is the system of loading the tape, I do not understand what he wanted to do, I can not even explain ... Strange how something they had been drinking at Sony that day. Another thing to know, as so often with this stuff, it is fixed at 48kHz to analog, digital that is obviously automatically block the source said.

- Did you try many other models before getting this one?
Yes, I had a small plate with Aiwa cassette loading per drawer, like a CD, it was super cool, but I have been robbed, yay, and after it was done well, too bad

- What is your opinion about the value for the price?
It was to cost 3000/3500 francs at the time, it would make about 500 € now, but it was a time when only the DAT allowed home to make digital recording, before the MD and CD. The DAT is better on paper, and it's obvious that it's better than 48kHz 44.1kHz, especially without compression (such as the MD ...), by HYPER IS FRAGILE cons and a priori is the case for all DAT! Even with careful, with the carton, I've always had problems by transporting ... Sometimes it also has problems, fortunately solved by the cassette self-cleaning (on the other hand that should be much more that!).

- Knowing what you know now, would you make the same choice? ...
Well I will opt for a less crappy, but by the studio, rarely needing a DAT, okay, I do not carry over, and when I need it works ...

Exactly, I wanted to restart it: Can not play back a tape, playback does not start and I "deposit" to display. Well ... I remove the speakers are too close, I expect that the unit heats up, and after a very long time it works!

Then, after some reading I hear the sound kidding, ok: cleaning cassette. And then nothing, as if the tape was blank ...

So I correct: when I need it does not work, after 24 h still the same despite several attempts at cleaning and ...