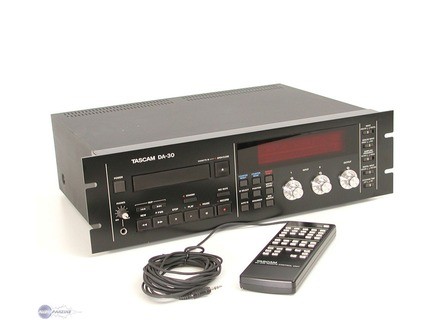 Tascam DA-30
4
The 30 is a dat da (ie track 2) with analog inputs and outputs on XLR or RCA. There are a cinch out more and bypassing the output level (fixed out). Numriques outputs are coaxial or AES / EBU. It is equipped with remote control. It is not equipped with a micro prampli (and therefore Obviously there is no 48 v). The maximum level is displayed which allows not having to be led on derivatives / meter throughout. If Exceeds, "0" flashes. It has a wired tlecommande. The edition of id can be rev prcise with this gear. I bought the DA30, there are more than 10 years (in 1993, I think). The particularity of my own sometimes slip. This means it needs a tape of 90 minutes to place an under 3 minutes ... Being given that it is used to mix in rgy. If an error occurs, it is not so bad, but even when, during a stressing me tap collection's outdoor ...
I had the analog Otari MX5050 with the era. I must say that these days the silent one glad not to have no breath, no wow, no loss of Aiges ... In short, c'tait paradise. Dj's era, I had the United States to import a mix CD. I had also an arrangement with the artist that I would have given this cot hire. In short one in the other, I pay 300 euros in nine. Obviously I do not regret it.
I had the opportunity to compare its sound with MODELS stereo from Sony. The Tascam sounds better. It is probably of the converters, but it is clearly audible.

Tascam DA-30 manuals and other files