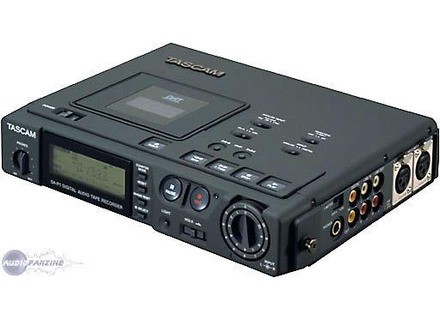 lekoala's review (This content has been automatically translated from French)

Yes, indeed, I think that DA-P1 is very good, I wanted to buy it but it is no longer manufactured. I had to use the opportunity, I found so I expect his arrival home. I hopes to it is pretty solid on all fronts to support this kind of thing .. the occasion.
I bought the portable DAT Sony TCD-D03 The first, in fact, and it lasted only 8 or 9 months, the batery after 3 months and at bous 25 minutes she was empty .. I hopes to that ...

If a person can scan my doc in French, at least the technical information and in fact, things that we can not guess. And yes, I do not know if I'll have the doc.

for the note, I rponds on what I think after reading pages and pages about this product
I rpondrais after you

Jrme
Did you find this review helpful?yesno
»

Eci's review (This content has been automatically translated from French)" Tascam"

Tascam DA-P1
4
Hello
Pro product
Mine is also for sale
Did you find this review helpful?yesno
»

Tascam DA-P1
5
With two batteries and carrying case is the top. A bit expensive, but not regret his money! It is suitable for all uses, and has a great sound. I did beaucup for an external (to the sample), easy to use, efficient, it is a device that I would never sell. The Argus is around 900, that price you do not get stolen.
Did you find this review helpful?yesno
»

Sam75018's review (This content has been automatically translated from French)

Tascam DA-P1
5
Just an additional note of advice (most relevant) mentioned above:
preamp quality .... very average, same for the converter ... but hey the camera date and it is also somewhat related to the perfs of other devices when it was released.
I / O SPDIF poor: it difficult to synchronize with a super clean signal NUM (measured with a jitter <2 / 3 ppm (regular stalls ...). The output is a bit better, but "sticks" just in SPDIF specifications level: do not expect to make a few meters to the exit or risk losing the samples (mostly hidden by the receiver which interpolates between ...).

Otherwise, it must be recognized that effective, compact, and it saves time!! It is also suitable for the report: So tough!
Did you find this review helpful?yesno
»
Read the 7 user reviews on the Tascam DA-P1 »