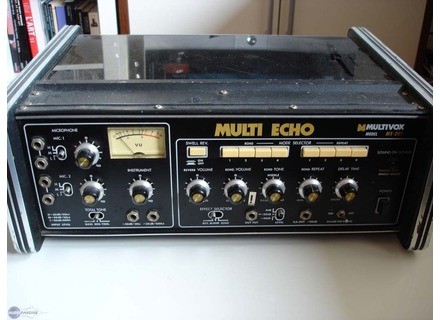 All user reviews for the Multivox MX-201

Multivox MX-201
5
The Multivox MX-201 Multi Echo is a uniquely designed analog delay box that I've used in a recording studio setting. The studio that I work at has one of these, but it isn't set up all the time and only sees use when someone decides to whip it. The box has got two channels, and two 1/4" inputs on the front panel for each of them. It also has different 1/4" outputs as well. I don't know if it has other connections in the back since we just decided to plug the instrument directly into the box and use it that way. The MX-201 Multi Echo isn't rack mountable as it sits in it's own casing that looks like a guitar amp head.

The Multivox MX-201 Multi Echo is an awesome delay box to have in any situation. It's definitely best suited for use in the studio, and this is the only setting in which I've used the MX-201. There seems to be a few other Multivox Multi Echo boxes out there, but the MX-201 model is the only one I've used to date. I'm not so sure what kind of price this box commands, but it's pretty rare so I don't think it will be cheap. If you're lucky enough to try this one out, I definitely think you'll have some fun with it...
Did you find this review helpful?yesno

Feelbe's review (This content has been automatically translated from French)

Multivox MX-201
5
What are the effects, types of effects available?
Tape delay, spring reverb and tape (I think = Swell Reverb)
What is the connection?
by jack
so it's a very big machine that makes 3 effects, either echo or reverb or both. But be careful it's heavy!
ah yes, you can put the "sound on sound" that is, the magnetism is no longer cleared ducoup the sound comes back when the band returns, it's funny but hard to use properly unless you want to do psychedelic ...

The general configuration is simple?
quite simple, we choose one we want to have instrument is adjusted with the meter (3 max separately), then it is right that everything happens, the gap between the echoes is chosen with the volume pot of speed of the band but also with the heads that we choose to activate it, everything is very logical but still demand some time to control the aircraft.
The reverb on it is very easy to use and really beautiful

if anyone has the manual I am very interested to have a copy!

The effects are they effective, responsive and realistic enough?
could not be more realistic and more pure than a tape echo, the advantage of this machine is very little "wandered" ie it remains very constant, which does not distort the sound by making it more acute and more serious at the slightest dirt in the engine or on the web.

Which instruments do you use?
used with a Gibson ES335, Greco sg, Squier SQ series Stratocaster, Gibson Les Paul Studio, but also with a microphone, the results were more beautiful than each other. I think this old machine truly embellishes the sound of any instrument.

Amplified with a 4x10 Fender Deville or a Trace Elliot acoustic: Awesome!

another interresting point that we do not see in the picture is that i have a reserve of band, meaning that you can put the circular band (homemade) from 10 meters if desired , the longer the better the quality of his band shook preserved longer.

I use it for about 6 months, I have been lent, I did not know the brand or model but I am very satisfied and I e advise all those who wish to find its true owners of even the sixties instruments feel more (eg digital)

the device dates back 60 '/ 70', mine has never had a problem since even though his owner let him sleep for many years