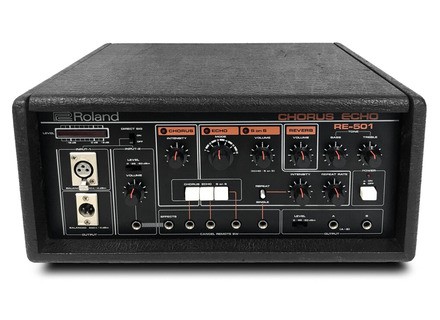 RE-501 Chorus Echo, Delay / Echo from Roland in the RE series.

jipe33's review (This content has been automatically translated from French)

Config trs simple, foot-switches possible rglages minimalist but sufficient, no manual (except for cleaning the heads and change the tape).

It discovering sounds no one would imagine with the RE-501, S is the function S is surprising and fun, but it is not a squenceur

The chorus is powerful and trs trs rich
The warm reverb
And the echo is simply gnial.
In addition to adjusting the gain is discovering surprising effects of saturation
I use an old coffee on an old amp. . . it works!
CA allows me to "finish" my sound and to experiment when I'm in the mood.

I have been using 4 or 5 years and I am delighted. Before trying I did not know how to miss. In addition, in concert, I use the output jack for "excite" my amp and the XLR output balance for me to connect the sound system. . . Casing not need DI or microphone in front of the amp. . .
I have been ready long term and I did not need it. . . When I have to make, I will seek to buy one. . . I can not do without.
It's really great stuff and I still open the hood to see the band dfile. . .
B's. . .

tremble's review (This content has been automatically translated from French)

Roland RE-501 Chorus Echo
5
Echo / reverb / chorus / her on his
the purest analog
The connection comes down to an input and an XLR output
A jack in and 2 out A (signal + effect) and B (the effect)
5 in control:
_effet on / off
_chorus on / off
_echo on / off
_son its on / off
_feedback single repeat
I would have appreciated a control in cv and more on the feedback and the repeat rate as on the echo korg course, but was not dreaming!

The effects are not themselves realists, they are super colorful and divine hot.
I use it all the sauces in general effects loop, a BAR, on synths, voices etc. ...
I love the reverb, which is where a beautiful spring made of metal and ethereal, and especially a single volume knob, so super easy to adjust (unlike a digital reverb), its always great (unlike a digital reverb ) but its always the same (unlike a digital reverb)!
I also like the echo that sounds! And which can quickly change the playback head, guaranteed. Accuracy in the last 3 settings (4/5/6) are mixes of three heads!
I almost never uses the chorus which is almost inaudible on my synth sounds, but works better with voices.

I use it for at least 6 or 7 years. I love the absolutely inimitable sound (even with another echo box, let alone with any emulation months, which are often off the mark), his beautiful breath (light), its buttons, everything except its weight is mega heavy!
I tried to sound a Redson minus, very rotten next!
I think € 500 is still well Reuche, but once she was not moving so that kif! The right to the top!
And yes I would do without hesitation that choice (which was not one at the time, but rather an unexpected windfall!)

-Simple setup
-Editing effects quite limited ... but we can play with the faults of the machine .... with feedback, you can create and Controller surperbe feedback without end .... It's great.
-No manual .. and no need.

-Effects efficace.moins very breath that the Re-201.
Loadings of the preamp and Larsen are great.
Use with guitar, with microphone and with console.
The reverb sound of pink floyd .... this is definitely one!!
Mystique reverb completely unreal but great for all types of music.

-Use for 2 months.
-Forte: sound, the possibilities.
-Dot: the rarity, price, change bands and hard to find.
It's a great machine !!!!!!! but very special.