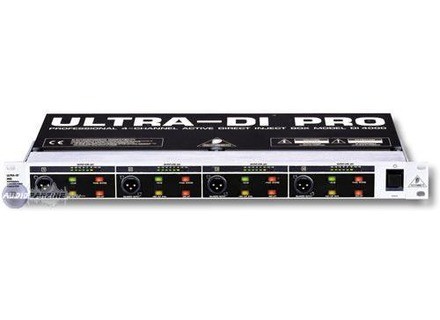 Ultra-DI Pro DI4000, DI from Behringer in the Ultra-DI series.

The DI4000 gives you four first-class DI channels in one rack space. With two inputs (XLR and 1 /4 \" TRS), a balanced output (XLR) and a 1 /4 \" link output per channel, up to 40 dB of switchable input attenuation and up to 20 dB of gain, the DI4000 is equipped to deal with virtually any input signal, while the OT-1 output transformers ensure clean, powerful output.

Behringer Ultra-DI Pro DI4000
5
4 circuits (apparently separate):
An XLR jack and one 6.35-priority jack. A link to a 6.35 jack pad input 0dB/-20dB/-40dB
Output: an XLR, a 20 dB switch, phase reverse, a switch has 8kHz low-pass (6dB/octave), and finally a ground lift
A peak-meter per circuit.
This box is rack mountable in 19 "1U, symmetrical and allows you to avoid signal interference, and lower the impedance so that it is legible to a mixer (600 Ohms)

Easy to use, simple and complete. One comment to make: Why have they put out the front? I think there are geniuses who have forgotten to think. m'enfin, well, we start a small patch in the rack and the thing is forgotten. The manual just to recall what a DI and we recall the rules of good wiring.

Purely transparent, except of course if a-40dB pad, then yes, it snores. The high-cut is rather incidental, at least I've never used. if anything was wrong a good job

The idea is great, simple and cheap. Must be said that I had more than me typing pool of 3 or 4 see 5 DI at the foot of pianist, at least it solves the problem. And even with a bit of stinginess, I had better spend a guitarist in the box if it is not too expensive on scene (because it must be remembered that a DI with 10m of cable asymmetric upstream is not a nothing at all). It will never replace the individual DI but it's going to fly in a few anyway. Especially at this price! Price / quality ratio to rival competitors
Behringer thank you

fahren-drums's review (This content has been automatically translated from French)

The quality is okay trs

I use it for 2 weeks.
Many do not like Behringer. But when it was not full of money is not bad. Of course I would not take a mixer at home but for a direct box is 80 euros a super vrment is no problem everything works well trs. Behringer Bravo!

Behringer Ultra-DI Pro DI4000
5
It&#39;s still a box of direct force. Dcidment, I collect ^_______^ Bein yes, because it is virtually impossible to get scne Spar (part may be for small sound systems), so as to have a Especially that little Reserved

It is a bo-bote easy to use, I&#39;ve never needed to have a manual to operate them. This kind of beast of direct (rack so), I use them mostly for scne on synths. A rack of four possible channels even the ground just below the instrument supports a stand using two synths Cables jack short (1.5 m) between the synths and rack ID, So economy of breath. Perfect and practical: each stand has a rack ^ ^ I prfre even better than a MODEL MODEL 8 channels such as if I use an 8-channel, I would have to put it between two stands of synths and conscquent using jacks Cables longer between synths and DI, so the danger of blowing more important. Behringer Dj in gnral, the sound is not always terrible, so do not tempt fate by the tail using jacks longer. In my opinion, the 8-channel rack DI is to rack expanders and as we prfrons versions use the keyboard in relation to versions of rack synths on scne ... Well, it is true that it is not discreet about scne trs to have rack on the floor but all fawn, when there are many keyboards, this causes a lot of cable, these the last cache a little ^ ^ One thing above all that I can not find this terrible MODEL is rglages buttons. These are buttons that are easy drglent during transport and then when you get on scne must each contrller rglages that are correct and we do not always have time to takes care of such dtails, especially when only one quarter of an hour to get a scne. Especially since, to complicate matters, there is a push channel of amplification 20 dB front to push attnuateurs + 2 - 20 dB across the rear: when you&#39;re in the heat of action to install a scne trs in a short time, it is not always empty to think attenuating the rear face ... :-( IDAL is to have all rglages amplification and attnuation (and others) on the front and, especially, whether the switches instead of buttons: is not a drgle at least during transport: time to SAVE on scne, we can then prparer and rgler before transport ... ^ ^ I also think they are upside down. The XLR outputs are on the front and the inputs + outputs Link rear facing. The opposite would have t more practical on scne, if the case where they are bolted on racks (effects, for example), it is more convenient to have between the front and XLR output + Link on the back face re, it quickly to the musicians have to tamper with the rear rack just to plug their instrument, especially that there are easily attnuateurs drglables the rear ... A Because of this, I probably never bolts in a rack. Well, for the Behringer ULTRA-DI DI800 Pro which was released a few years the APRS DI 4000, they corrected that. But it is August 1 channels and is too much for me, as said above ...

Well, you know what they say: Behringer = poor quality or with quality ... Dtrompez you. This beast of a quality of live is close to the BSS AR-416. And this for about 3 times cheaper! It is not at all the "bad quality", Behringer, it&#39;s just a bit worse, that&#39;s all. And yet when I say a bit is that it&#39;s really a bit: just a chouilla. However, it has a lightweight problem of crosstalk between the four channels - a bit like parasites - but this is trs accptable for its price. Especially for the scne ^ ^ The Alto DI-4 have the same problem only worse (it&#39;s a shame, because it is ultra-convenient to have all front and rglages have all the connections across rear) and are more Chres. For once, I&#39;m glad Behringer

))) Well, it is clear that for the studio, I never use the Behringer or Alto I prfre my BSS AR-416. And more problem of crosstalk. But it is also a different price range. on the other hand, no need to have as many as there is no longer required to use both synths 10 Systmes thanks to multitrack recording, so that has offset the investment ^ ^

I must say that compared to other devices as pluttmdiocre I know this brand, this DI plutt surprised me though. Well, I do not dare until told to go buy eyes closed 8-channel version, the Behringer Ultra-Di Pro DI800, they have released APRS-shot to replace the DI 4000 and whose Price dfie more imagination but for MODEL prcis at least, I gladly would do this election if he had not this problem of pushbutton that is too easily drglent . As we have a lot of synths on scne (10zaine good), I have procured four new more (= 20 channels in all) ^ ^ And what&#39;s funny is that I tested the boards and I can not find the default crosstalk cit above. Well, I think it&#39;s one I srement dj which has a default, but no, it&#39;s gone! A wonder if I had illusions of sound.

I found him well:
<ul>
It is cheap and it is important when it comes to get them for 10 synths ^ ^
It&#39;s sturdy, can handle them without fear of scne
A saw a nitre-channel and is not on all models that we find ^ ^
</ul>
I found him to claim:
<ul>
Pushbutton drglables too easily during transport
Crosstalk problem (though ^ ^). Well, it&#39;s lightweight: for scne is still accptable ... ^ ^
Think upside down (between the rear and the front XLR) and impossible to fix the rear rack brackets in order to reverse the device and put the entries the rear XLR
</ul>

DamM's review (This content has been automatically translated from French)

14 people did not find this review helpful

Did you find this review helpful?yesno
»
Read the 5 user reviews on the Behringer Ultra-DI Pro DI4000 »