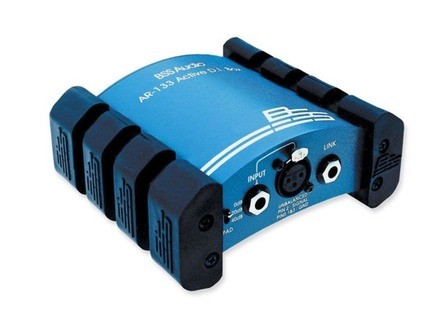 noswitch's review (This content has been automatically translated from French)

BSS Audio AR-133
5
A must soon as there was good stuff, there has DI BSS!
Did you find this review helpful?yesno
»

BSS Audio AR-133
5
Ben is an active mono DI, is a XLR input, a jack, an XLR output jack and a link.
An on / off switch, a pad 3 positions, a ground / lift.
Battery operated or with the 48v. You can leave the battery in, it discharges not if you use the phantom

It is ultra tough, we could start from the roof of a building 30m, she will damage the floor.

Only thing they could have done differently is a combined output or 2 outputs, 1x 1x XLR and jack.
But it's really good to say something

It's been at the top all we can ask a DI to ....
And yet, I never asked him to serve me a beer, chances are she does.

When you need a mono DI is always my first choice, and I've never disconnected to turn another.
Even after that there are as stereo DI, I sometimes prefer BSS 2 out ..
You plug it works, and you pass in succession.

It is rather a transparent box, and that's good, that's what we asked.

In all rooms worthy of the name when I was working or playing there at least. 4 or 5 in most rooms.
I have mine for a long time, it was widely used, and it is still like new.
A war machine I tell you!
So of course it's a little more expensive than the competition, but the quality / price is top. This is a DI for life ...
A friend had 2 DI in B ....... ger he not understand why there was some weird stuff, and broke quickly. He borrowed me a weekend for my BSS recording session, and the week after he bought one.
It is a bit like a sm 57, I would say that all people who work in this environment should have one.

If one day he takes me a second I hesitate not one second!
In short, a must ..

nobs's review (This content has been automatically translated from French)" Excellent"

The preamp is fairly neutral.

Very good product. Robust and easy to use. I bought several, some of which I have for over 8 years and still work as well.

in the same kind, also advise the Proco DB1

Did you find this review helpful?yesno
»
Read the 11 user reviews on the BSS Audio AR-133 »