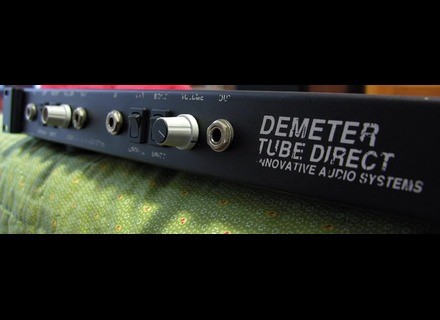 Demeter Tube Direct 4 Channel DI
5
The Demeter Tube Direct 4 Channel DI is an apparently rare piece of gear for use in the studio. The only reason I say it's rare is because I could find any information about it on the internet. Basically this is a rack unit that takes up only a single space, but has four separate DIs to work with. It has 1/4" inputs and outputs and XLR outputs in the back to hook up to your patch bay or interface.

You really don't have to do much to use the Demeter Tube Direct 4 Channel DI. Simply make your connections, set your level and you are good to go. It's a simple DI, but it does a great job and it's cool to have four in row in one place, although it does take away the ability to leave a DI by an amp. A manual is not necessary for this.

I've been very happy with the sound of things recorded with the Demeter Tube Direct 4 Channel DI. I mostly used it for keyboards and bass guitar, although it's definitely useful for whatever you want to record via direct input. It has a nice and wide sound but it's not too heavy considering it's a tube DI. This is great to have if you are finding yourself needing a series of DI's with quick access.

For whatever reason, there isn't very much info out there about the Demeter Tube Direct 4 Channel DI, so I'm assuming that it's a tough one to come by. If you are able to come up with one of these, it's a great sounding DI that has strength in numbers. I don't know what one of them could go for, but anything less than a few hundred dollars (US) would be a good deal in my opinion for four quality tube direct inputs like this one. Good luck finding one!